Eighty six percent of teens anticipate that their next phone will be an iPhone, according to Piper Jaffray's 37th semi-annual Generation Z survey of 8,000 U.S. teens.

The survey gathered input from thousands of teens with an average age of 16.3 years. Discretionary spending patterns, fashion trends, technology, and brand and media preferences were assessed by surveying a geographically diverse subset of high schools across the U.S.

Apple’s share of smartphone ownership was up slightly in the Piper Jaffray Taking Stock With Teens survey. Of ~8,000 respondents, 83% have an iPhone, the highest percentage we have seen in our survey. The iPhone may have room to move higher, however, with 86% of teens anticipating their next phone to be an iPhone, tied for the highest ever in our survey (flat from Fall-18). Android was the runner up with 9%, down from 10% in the fall. The Apple Watch was the top smartwatch among teens, garnering 20% share, with the Samsung Gear next on the list at 2%. 22% of teens plan to purchase an Apple Watch in the next six months, down slightly from 23% in the fall. Overall, we view the survey data as a sign that Apple’s place as the dominant device brand among teens remains well intact.

Here are some other key findings from the survey:

Overall Spending Behavior
● Teens claim they spend ~$2,600/yr (+1% Y/Y; +6% vs. Fall)
● Food is the No. 1 priority for males in terms of wallet share & No. 2 for females; Chick-fil-A is the No. 1 restaurant for 3 surveys
● Footwear is gaining in wallet share for female teens while fashion accessories hits new survey lows
● Video games is one of the most notable share gainers in the survey at 14% of teen male spending vs. 11% multi-year average

Brand Preferences
● Athletic brands dominate teen preferences with Nike & Vans as top 2 footwear brands; lululemon hits all-time survey high
● Streetwear-brand Supreme fades; Off-White & European luxury brands gain; “preppy” (Polo, Sperry, Vineyard Vines) loses share
● Tarte is the No. 1 cosmetics brand, Neutrogena is the No. 1 skincare brand; 80% of teens say they get their beauty tips from influencers
● 83% of teens own an iPhone (up slightly vs. LY) whereas 86% of teens expect an iPhone to be their next phone
● Favorite social platform is Snapchat but Instagram is cited as the most used; Facebook engagement flattens

Check out the infographic below for more details! 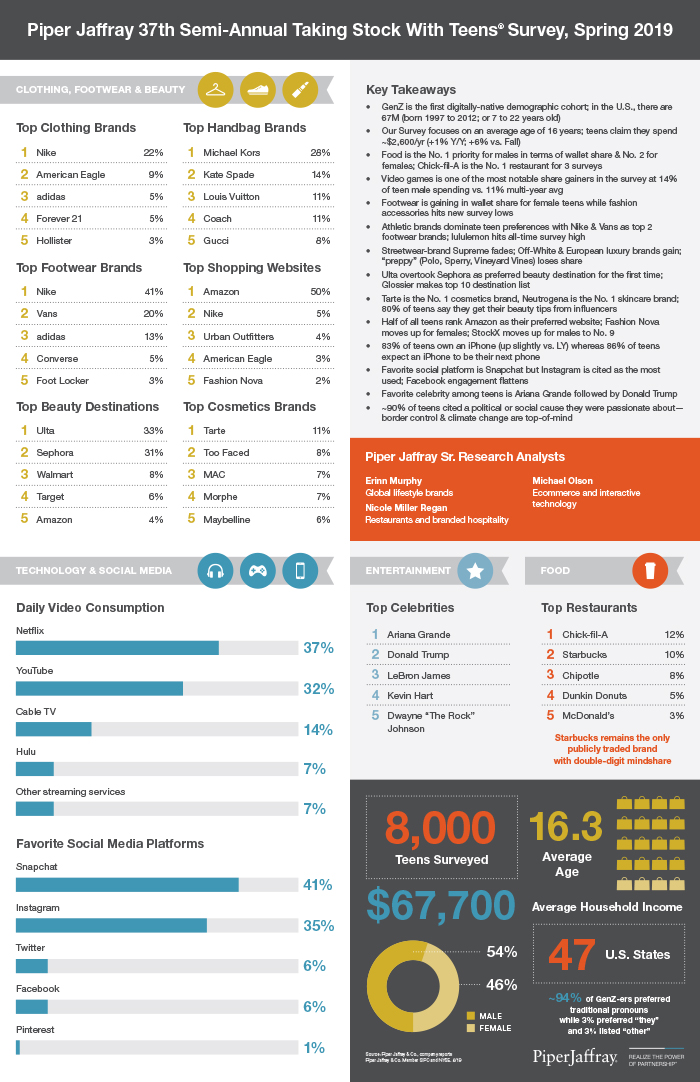 NoGoodNick - April 9, 2019 at 5:11pm
Sure, it’s easy to ‘plan’ on your parents giving everything you can imagine, after all, few kids have any real clue either where money even comes from, or what the hell their parents even do. But what they receive is another thing entirely. Heck, most of us are still ‘planning’ to win enough in the lottery to retire, but we know enough to allocate enough funds to do it the old-fashioned way too.
Reply · Like · Mark as Spam

odedoo1 - April 9, 2019 at 4:11am
This is the biggest bull ever, yes kids might wish for an iPhone but as the prices go up they can keep dreaming. Plus I travel all over the world and for about every 10 Androids I see one iPhone ( about ) so surveyors don’t show the truth.
Reply · Like · Mark as Spam
Recent