Worldwide smartphone shipments were down 6.6% year over year in the first quarter of 2019, according to a new IDC report. That means vendors shipped a total of about 310.8 million units in the quarter, a decline for the sixth consecutive time.

In 2018, smartphone shipments dropped 4.1% over 2017, which was inclusive of a first quarter that was down 3.5% – just half of what the market experienced in 1Q19. This quarter's results are a clear sign that 2019 will be another down year for worldwide smartphone shipments. The only highlight from a vendor perspective was Huawei, which made a strong statement by growing volume and share despite market headwinds.

"It is becoming increasingly clear that Huawei is laser focused on growing its stature in the world of mobile devices, with smartphones being its lead horse," said Ryan Reith, program vice president with IDC's Worldwide Mobile Device Trackers. "The overall smartphone market continues to be challenged in almost all areas, yet Huawei was able to grow shipments by 50%, not only signifying a clear number two in terms of market share but also closing the gap on the market leader Samsung. This new ranking of Samsung, Huawei, and Apple is very likely what we'll see when 2019 is all said and done."

While China will likely be a challenge for the rest of the year, it was the United States that saw the biggest drop in Q1. Smartphone volumes declined 15% year over year in the U.S.

"The less than stellar first quarter in the United States can be attributed to the continued slowdown we are witnessing at the high end of the market," said Anthony Scarsella, research manager with IDC's Worldwide Quarterly Mobile Phone Tracker. "Consumers continue to hold on to their phones longer than before as newer higher priced models offer little incentive to shell out top dollar to upgrade. Moreover, the pending arrival of 5G handsets could have consumers waiting until both the networks and devices are ready for prime time in 2020."


Smartphone Company Highlights
● Samsung saw volumes drop 8.1% in 1Q19 with shipments of 71.9 million. The results were enough to keep Samsung in the top spot of the market, but Huawei is continuing to close the gap between the two smartphone leaders. Despite challenging earnings in terms of profits, Samsung did say that the recently launched Galaxy S10 series did sell well during the quarter. With the 5G variant now launched in its home market of Korea and plans to bring this device and other 5G SKUs to other important markets in 2019, it will be equally crucial for Samsung not to lose focus on its mid-tier product strategy to fend off Huawei.

● Huawei moved its way into a clear number two spot as the only smartphone vendor at the top of the market that saw volumes grow during 1Q19. Impressively, the company had year-over-year growth of 50.3% in 1Q19 with volumes of 59.1 million units and a 19.0% market share. Huawei is now within striking distance of Samsung at the top of the global market. In China, Huawei continued its positive momentum with a well-rounded portfolio targeting all segments from low to high. Huawei’s high-end models continued to create a strong affiliation for the mid to low-end models, which are supporting the company's overall shipment performance.

● Apple had a challenging first quarter as shipments dropped to 36.4 million units representing a staggering 30.2% decline from last year. The iPhone struggled to win over conusmers in most major markets as competitors continue to eat away at Apple's market share. Price cuts in China throughout the quarter along with favorable trade-in deals in many markets were still not enough to encourage consumers to upgrade. Combine this with the fact that most competitors will shortly launch 5G phones and new foldable devices, the iPhone could face a difficult remainder of the year. Despite the lackluster quarter, Apple's strong installed base along with its recent agreement with Qualcomm will be viewed as the light at the end of the tunnel heading into 2020 for the Cupertino-based giant.

● Xiaomi also experienced a decline in 1Q19 with volumes of 25.0 million, which was down 10.2% year over year. Despite its continued movement into Europe and other regions, Asia/Pacific (excluding Japan) remains its most important region with China, India, and Indonesia accounting for the bulk of its volume in the region. Of those three critical markets, India was the only country in Asia/Pacific where Xiaomi grew its shipments during the quarter. Its brand continues to build out in many markets including India as it continues its push beyond urban markets and into rural areas of India.

● vivo returned to the top 5 of the smartphone market with volumes of 23.2 million and a market share of 7.5%, tying* it with OPPO for the number 5 position. Other than Huawei, vivo was the only other vendor at the top of the market that was able to grow shipments in 1Q19 with volumes up 24.0% over 1Q18. India continues to be its most important market outside of China, and the company continues to invest substantial money on marketing with the Indian Premier League for Cricket being a prime example of these investments.

● OPPO was tied* with vivo in terms of market share, although slightly behind in terms of overall shipment volumes. OPPO shipped 23.1 million smartphones in 1Q19, enough to capture a 7.4% market share, although volumes were down 6.0% from 1Q18. The recent announcement of the Reno series brought OPPO back to the forefront of the global smartphone innovation discussion. However, lower end models like the A series continue to drive most of its smartphone volumes. 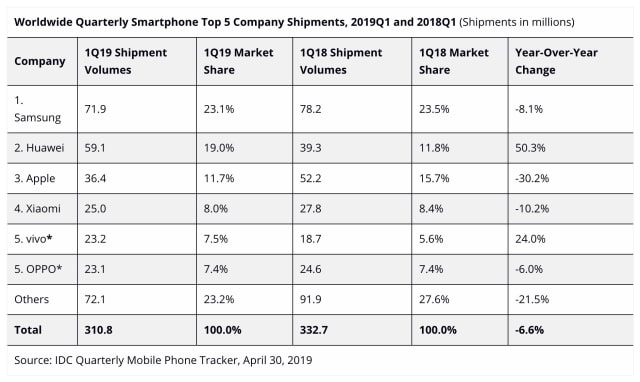