Apple has risen one spot to third on the 2019 Fortune 500 list. Companies on the list are ranked by total revenues for their respective fiscal years. Included in the survey are companies that are incorporated in the U.S. and operate in the U.S. and file financial statements with a government agency.

Two thousand eighteen will be remembered as the year that Apple first achieved a market value of $1 trillion, as well as when growth in iPhones, Apple’s largest single product by far, began to slow. Before the introduction of the iPod—the iPhone’s precursor—Apple was a once-exciting computer maker. Now, only a retailer and an oil company are bigger. Its challenge: as consumers hang onto phones longer, Apple is repositioning itself as a services provider. Already iTunes, Apple Music, iCloud, and cuts from sales in its popular Apple Store generate billions of dollars of sales. 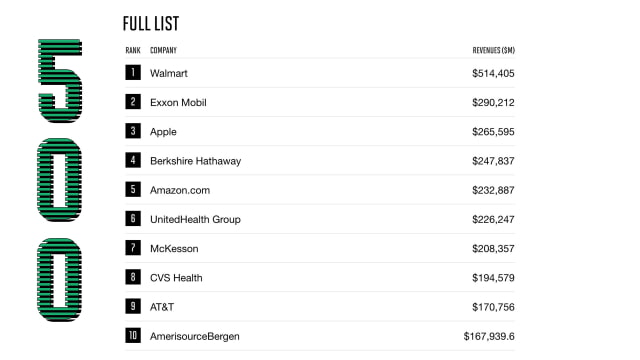 You can check out the entire list at the link below...