The Samsung Galaxy S10 5G was released today and early tests show it reaching speeds of over 1,000 Mbps on Verizon's 5G network.

The Verge shared the results of its testing this afternoon in Chicago.

Now that there’s a real, proper 5G phone on its network, Verizon has ramped things up. Coverage remains extremely limited: it varies widely and block by block. But when you find a good spot, it’s amazing. I just ran a speed test that crossed 1Gbps, and my mind is frankly a little blown. This is in the real world, where my iPhone XS Max is barely hitting 20Mbps in the same spot.

The site says going over 700Mbps is typical and crossing gigabit speeds can happen regularly if you're near a 5G node. The pilot episode of The Office downloaded from Netflix in 8 seconds and Iron Man 2 downloaded from Prime Video in 90 seconds.

Verizon's 5G network is only live in Chicago and Minneapolis and is still very spotty; however, the launch of the Samsung's Galaxy S10 5G will likely help accelerate carriers' push to expand their next generation networks.

Apple is not expected to launch a 5G iPhone this year; however, its recent deal with Qualcomm should result in an iPhone with a 5G modem in 2020. 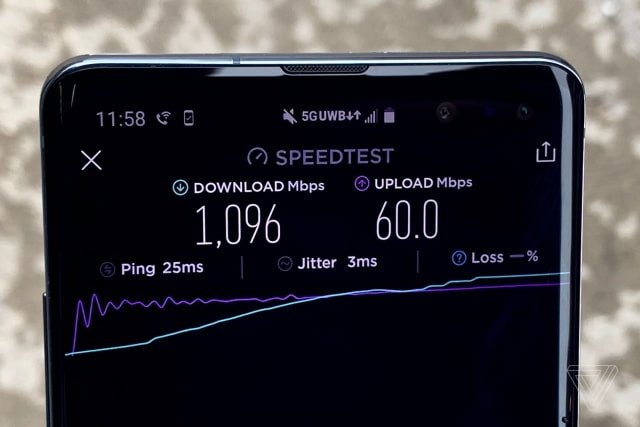 1reader - May 17, 2019 at 4:09am
Barely 1Gb and just few phones not the network. Can you imagine when the network will be crowded with 5G phones that the speed will be much slower!
Reply · Like · Mark as Spam

waiyungoo - May 26, 2019 at 4:09pm
yeah this is how they always introduce new network speed to the world. In actual life this is just B*ll Sh*t . part of the marketing strategy
Reply · Like · Mark as Spam
Recent