Twitter has announced that it will be bringing back Twitter to Mac with help from Apple's Project Catalyst.

If your iPad app would make an excellent Mac app, now is the perfect time to streamline your code base and bring your app to life on Mac. The beta version of Xcode 11 is all you need. Begin by selecting the “Mac” checkbox in the project settings of your existing iPad app to create a native Mac app that you can enhance further. Your Mac and iPad apps share the same project and source code, making it easy to change your code in one place.

Twitter says it will use Project Catalyst to bring its entire 1.5 million line code base to macOS. This will allow ongoing full feature parity with its iPad and support native Mac features like multiple windows, window resizing, drag and drop, dark mode, keyboard shortcuts, notifications and more.

-----
What happened with the old Twitter for Mac?
Historically, Twitter had a Mac app that shared the same roots as our iPhone app. Over the years, Twitter for Mac and Twitter for iOS diverged as Twitter increasingly focused on its mobile apps. Supporting the two separate codebases was no longer a sustainable option and ultimately we sunset the native Mac app.

To focus on the most important priorities, Twitter directed its attention to the core clients it would invest in strategically. This led to our Responsive Web codebase being the spearhead for all platforms via web browsers plus iOS and Android codebases as targeted strategic platform investments. We now had a strategy to effectively expand Twitter's reach with Web as a Progressive Web App (PWA) that could become our installable app for Windows and the lightweight Twitter Lite for Android -- one codebase, multiple clients. The refocused priorities also meant sunsetting Twitter for Mac, Twitter for Windows, Twitter for Windows Phone, Twitter for Xbox One, Twitter for Samsung
Tablets, Twitter for Google TV and other clients.


What will be different this time with Twitter for Mac?
The new Twitter for Mac app will use our existing iOS codebase, rather than being built from a separate codebase, following the same successful strategy we've used with Web to expand our supported clients. By supporting key Mac-specific behaviors on top of our iOS code, we will be able to maintain feature parity across our iOS and Mac apps with relatively low long term maintenance costs.


What can we expect with the new Twitter for Mac?
Mac users are some of the most engaged people on Twitter, and we are thrilled to introduce them to a new fully native Mac app that has full feature parity with our other platforms plus amazing new features. Expect great things like resizable windows with dynamic content, multiple windows support, native notifications, drag & drop and keyboard support. There may even be a few new exciting features we haven't been able to build for mobile devices that we’re excited to share in the fall!
----- 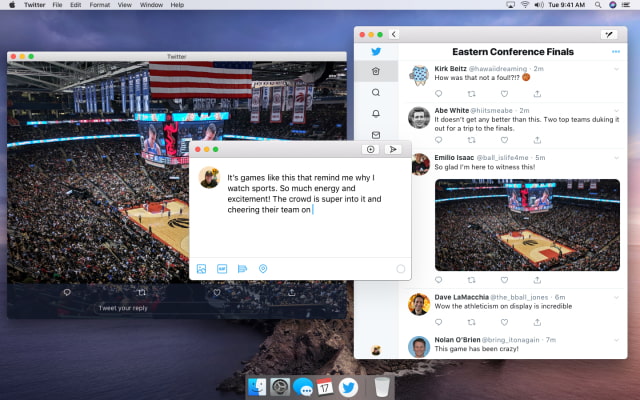 PaulieP - June 15, 2019 at 4:14pm
Twitter and anyone associated with them can suck the Arizona desert dirt and pray for water for all I care.
Reply · Like · Mark as Spam