Apple has begun rolling out Siri access to over 100,000 radio stations on the HomePod and iPhone, reports 9to5Mac.

Live radio, an upcoming feature of iOS 13, gives Siri access to over 100,000 radio stations from iHeartRadio, radio.com and TuneIn.

Asking my HomePod to “play radio station BBC Radio One” results in the Siri response “Playing BBC Radio One, provided by TuneIn.” and the audio starts playing. You can also start other radio stations just by saying their name.

Currently, Siri is picky about how you phrase your request. Without keywords like 'radio station' in your command, Siri will fall back to Apple Music searches. This may improve prior to the feature's official launch later this year.

The site also notes that iOS 13 beta users can search for stations by name in the Music app's Search tab. Played stations appear as items in the Recently Played section.

Apple just released the first public beta of iOS 13. If you would like to try it out, you can sign up for the Apple Beta Software Program here. 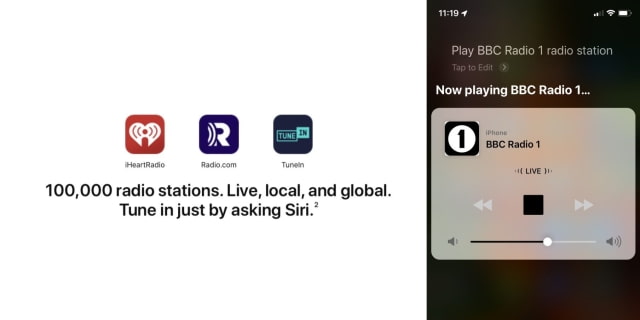