The decline was largely due to a weak memory chip market.

The weakness and price declines in the memory chip market persisted as effects of inventory adjustments by major datacenter customers in the previous quarters continued, despite a limited recovery in demand.

The quarter would have been worse if not for a one time payment from Apple for failing to meet OLED panel order minimums.

The Display Panel Business reported improvement due to a one-off gain in mobile displays and stronger sales of rigid OLED panels, which offset losses from large displays.

Samsung said its mobile business posted stronger shipments due to new mass market models but was weighed down overall by slower sales of flagship models and increased marketing expenses.

Here's a look at what the company expects for the second half of 2019...

-----
2H 2019 Expectations
Looking ahead to the second half, Samsung expects persistent uncertainties in the memory business, although demand is seen growing further on strong seasonality and adoption of higher-density products. For system semiconductors, higher demand in mobile APs, image sensors and display driver ICs (DDIs) is also expected to be seen.

As competition in the smartphone market is seen increasing in the second half, Samsung plans to enhance its product lineup and expand sales of new mass market models. The Network Business will prioritize building the foundation for its global 5G business expansion.

The Consumer Electronics Division expects a seasonal boost in TV sales and will focus on premium models, while offering new appliances such as Bespoke refrigerators and AirDressers.

The Company is facing challenges from uncertainties not only in business areas but also from changes in the global macroeconomic environment. Samsung will, however, continue to invest in enhancing business capabilities and future technologies, including 5G, system semiconductors, artificial intelligence and automotive components, for longer-term growth.

The main portion of the Company’s 2019 capex is earmarked for building infrastructure to address demand beyond 2019, and a larger percentage of this year’s investment will be made in the second half.
----- 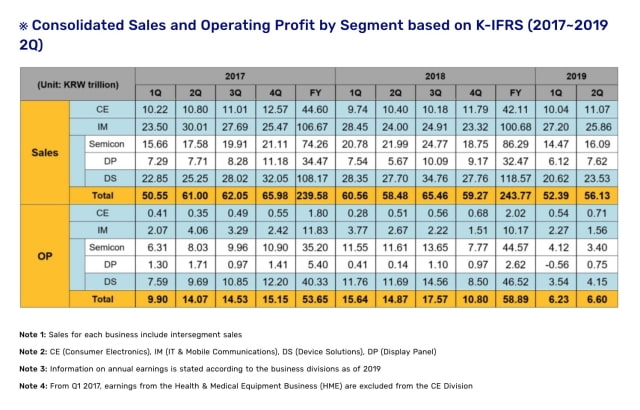 Great! - July 31, 2019 at 8:04am
Flagship models aren’t selling as well due to not being able to copy from Apple. They have to wait for Apple to release new iPhones before they can hope to sell more flagships with copied ideas.
Reply · Like · Mark as Spam
Recent