The new 40mm Apple Watch Series 5 features a battery with a metal casing instead of the traditional foil pouch, reports iFixit.

Instead of the usual dark-colored outer foil pouch surrounding the battery (which most lithium-ion batteries sport), we noticed a snazzy new metal casing, most likely aluminum. This is the first time we’ve seen this in an Apple product, and it might tell us something about the future of battery replacements.

The site found a patent which may offer details about the new design. It appears that the metal casing is more space-efficient, allowing Apple to cram 10% more battery capacity into the tiny 40mm smartwatch.

Additionally, the metal casing makes the battery much more resistant to accidental punctures, allowing for safer battery replacements. It could even allow Apple to attach the battery to the chassis using screws, eliminating the need for glue. This year's Apple Watch battery was still glued in; however, that could change in future devices. 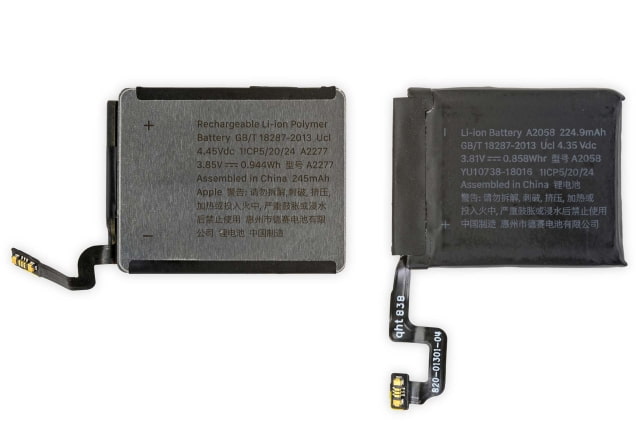 [New on Left, Old on Right]