Apple has acquired Spectral Edge, a UK startup that specialized in improving the quality of images and video on smartphones and other devices, reports Bloomberg.

In filings made public today, Apple corporate lawyer Peter Denwood was named a director of Spectral Edge Ltd. and the startup's other advisers and board members were terminated. 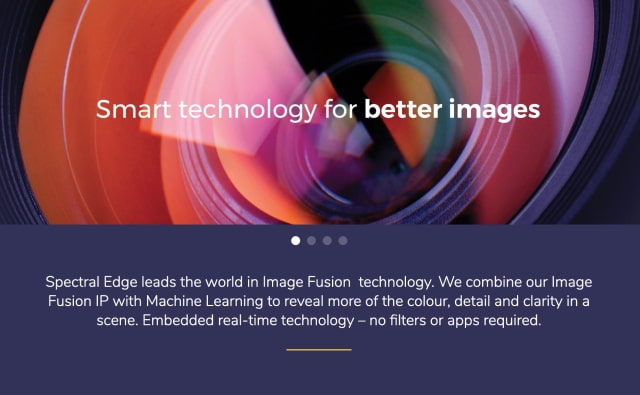 The Spectral Edge website has already been shut down but here's how the company described itself.

------
Based in Cambridge, and born out of the University of East Anglia’s Colour Lab, Spectral Edge is a fast growing deep tech company that combines cutting-edge image processing with machine learning to improve pictures and videos on mass market devices. Our patented IP is embeddable and can be implemented purely in software or silicon, without needing any apps or filters. This is done in real time on a pixel-level.

We work closely with specialist image science departments at a number of universities including the University of East Anglia. Our team, which is made up of PhD graduates, professors, developers and researchers, collectively has over 100 years’ expertise in image processing R&D.

We’ve already developed a suite of exciting technologies for smartphones and on demand broadcast. The same technology, however can be incorporated into any application with sophisticated imaging requirements, from security and surveillance systems to webcams, driverless cars and drones.
-----

The company had raised more than $5 million in funding but its unclear how much Apple paid to acquire it.