Apple's iPhone XR was the best selling smartphone globally in Q3 2019, capturing 3% of the total market, according to a new report from Counterpoint Research.

In fact, except for the launch quarter in September 2018, iPhone XR has been the top-selling model globally in every quarter since Q4 2018. The XR alone contributed to over one-quarter of the total Apple sales during the quarter, making it the bestselling model for Apple across all regions. Apple also adjusted the price of the iPhone XR in China and several other markets, which helped keep demand strong during the quarter. The iPhone 11 also made its debut in the top 10 within the launch quarter.

The next best selling smartphone models last quarter were Samsung's Galaxy A10 and A50, followed by the Oppo A9 and the iPhone 11.

The volume contribution in total sell-through for the top 10 models combined, increased by 9% YoY to capture 17% of the total sales compared to 15% in Q3 2018. However, the combined wholesale revenue of the top 10 models declined 30% YoY. This is because the mix of mid-tier devices in the top models is increasing. There were five flagship devices in the top 10 in Q3 2018 but only three this year. And part of the reason for this is the improving capabilities of devices in the mid-tier over the last year. Premium segment features are trickling down to the mid-segment at a faster rate. In fact, in some cases, smartphones in the mid-tier segment are now equipped with features that were absent in some premium segment products as recently as a year ago.

Counterpoint says that the increased mix of mid-tier smartphones has led to a fall in revenues for some OEMs. Overall handset profits are said to have declined 11% YoY in Q3 2019.

Check out the chart below and hit the link for the full report. 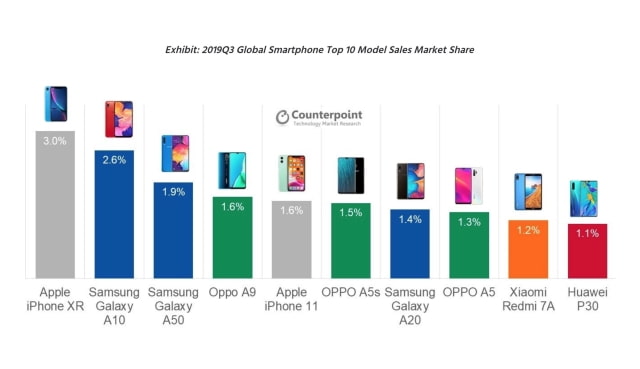 TechRoar - December 24, 2019 at 11:59pm
Well yeah, it’s one of the least expensive of the latest releases. Not surprising.
Reply · Like · Mark as Spam
Recent