Bose has announced that it will close all its retail stores in North America, Europe, Japan and Australia over the next few months.

The company says it's made the decision to shut down it many of its physical locations due to the popularity of online shopping.

You can read the full statement from Bose below...

-----
Given the dramatic shift to online shopping in specific markets, Bose plans to close its remaining 119 retail stores across North America, Europe, Japan and Australia over the next several months. In other parts of the world, Bose stores will remain open, including approximately 130 stores located in Greater China and the United Arab Emirates; and additional stores in India, Southeast Asia, and South Korea.

In 1993, Bose opened its first store in the United States to provide personal, private demonstrations for Wave music systems and Lifestyle home theater systems. As smartphones changed the industry, the company’s focus turned to mobile, Bluetooth, and Wi-Fi solutions. Today, Bose noise-cancelling headphones, truly wireless sport earbuds, portable speakers, and smart speakers are increasingly purchased through e-commerce, including Bose.com; and Bose is a larger multi-national company, with a localized mix of channels tailored for a country or region.

“Originally, our retail stores gave people a way to experience, test, and talk to us about multi-component, CD and DVD-based home entertainment systems,” said Colette Burke, vice president of Global Sales, Bose Corporation. “At the time, it was a radical idea, but we focused on what our customers needed, and where they needed it – and we’re doing the same thing now. It’s still difficult, because the decision impacts some of our amazing store teams who make us proud every day. They take care of every person who walks through our doors – whether that’s helping with a problem, giving expert advice, or just letting someone take a break and listen to great music. Over the years, they’ve set the standard for customer service. And everyone at Bose is grateful.”

Bose will be offering outplacement assistance and severance to affected employees. Additional details, including the number of employees affected, will remain private.
-----

Have you shopped at a local Bose store recently? Let us know what you think of the closures in the comments! 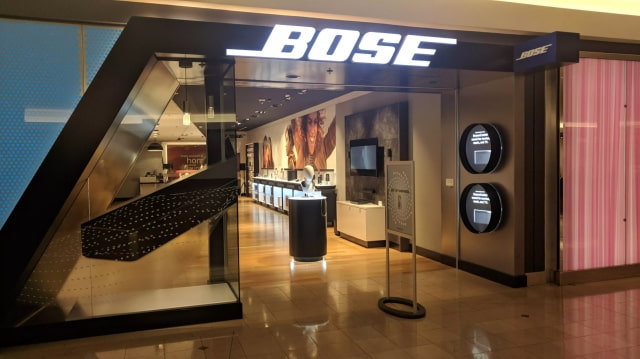 PaulieP - January 18, 2020 at 2:19pm
Want to go for round 2. Cyberstalking is a real thing dingo. At this point your just my gay fanboy so I could care less. Keep sucking on my dust and follow me wherever I go. Remember... you the one that cares about me so much you use my name to pretend your a girl. That’s transgender. You also follow me wherever I go... like a puppy. You try to get under my kin because you want my attention and you miss me. I think your actions speak louder than your words and that’s what they’re saying. YOU WANT ME AND ALL I HAVE TO OFFER BUT YOU WONT GET ME BUCKO. HAHAHAHAHA
Reply · Like · Mark as Spam

PaulieP - January 19, 2020 at 6:06pm
I see I’m not only getting under your skin, i am in it to win it. You want me so bad that you use my name, you follow me, look for me in Christmas, try to get me riled because you want attention. I don’t respond to your posts you follow mine. Actions speak louder than words weirdo. You’re all kinds of messed up son. If you find me in real life I’ll let you suck on it if you want. You have to beg like you’re begging now. If not I’ll find you another man to play with but you’ll have to pay cause you’re probably a really ugly person on the outside just as you are on the inside. Ahhahahahahaha. You make this too easy boy!
Reply · Like · Mark as Spam

PaulieP - January 20, 2020 at 7:40pm
Ok, keep following me puppy. Keep using my name to be a better you on these chat boards. Oh and keep trying to suck my stuff. You’ll never ever get it loser. Get a life, yours is a pathetic joke. Think you’re the winner. Hahahaaha
Reply · Like · Mark as Spam