Check out these early benchmarks for the new 2020 MacBook Air. The benchmarks were shared by Jason Snell at SixColors.com.

Snell used Geekbench 5 to test a 1.1GHz Quad-core 10th-Generation Intel Core i5 Processor MacBook Air model. It scored 1047 in single-core performance and 2658 in multi-core performance. Compare that to 790 and 1628 for the 2018 MacBook Air.

I was only able to test the $1299 model that includes the quad-core i5 processor, so I can’t test whether the highest-end model meets Apple’s claims of speeds twice as fast as the prior model. But I was able to test the new laptop in Primate Labs’ Geekbench 5 and compare it to older Mac models. The results were encouraging, with a 32 percent improvement in single-core performance and 63 percent improvement in multi-core tests. (More cores helps.) 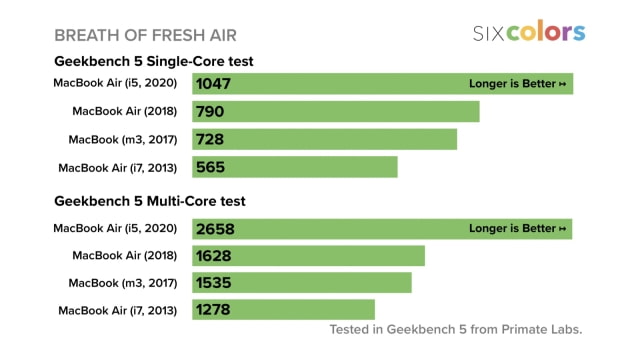 Snell suggests that if you really don't need a new MacBook, you could wait and see if Apple releases an ARM-based Macbook. Otherwise, the new MacBook Air is a great buy.

If you don’t really need a new Mac laptop, maybe you should wait to see what happens with ARM. But if you’re someone who has been holding out for a new MacBook Air—and ideally one without that infamous keyboard—I wouldn’t recommend that you wait. This is the MacBook Air that you’ve been waiting for.

You can learn more about the new MacBook Air here.