Spotify has issued a statement applauding Epic Games for taking a stand against Apple. The statement was provided to Recode Media host Peter Kafka.

"We applaud Epic Games' decision to take a stand against Apple and shed further light on Apple's abuse of its dominant position. Apple's unfair practices have disadvantaged competitors and deprived consumers for far too long. The stakes for consumers and app developers large and small couldn't be higher and ensuring that the iOS platform operates competitively and fairly is an urgent task with far-reaching implications." 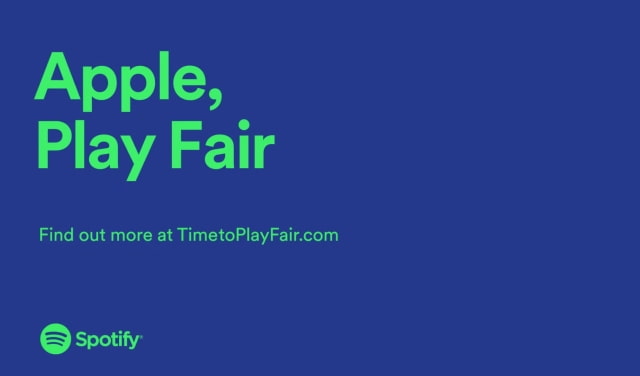 Yesterday, Epic Games launched a direct payment feature in Fortnite that saved users 20% but didn't give Apple 30% of its revenue. Apple promptly pulled the app from the App Store; however, the company was expecting this response and was ready with a lawsuit accusing Apple of anti-competitive restraints and monopolistic practices. A similar scenario played out with Google and the Play Store but it's possible to sideload Fortnite on Android so the impact to users isn't as severe.

Epic Games also launched a #FreeFortnite campaign against Apple, complete with a video calling for users to join the fight to stop 2020 form becoming '1984'. Notably, Spotify already has a video and a website dedicated to its fight against Apple. The EU recently announced a formal antitrust investigation into Apple following its complaint.

It's likely that Epic Games will have support for its lawsuit from Microsoft and Facebook. Both companies have publicly spoken out against Apple this month for refusing to allow their cloud gaming apps on iOS.