In this ad, the company argues that the change will force publishers to start relying on subscriptions instead of ads for monetization, changing the Internet as we know it.

Apple plans to roll out a forced software update that will change the internet as we know it - for the worse.

Take your favorite cooking sites or sports blogs. Most are free because they show advertisements.

Apple's change will limit their ability to run personalized ads. To make ends meet, many will have to start charging you subscription fees or adding more in-app purchases, making the internet much more expensive and reducing high-quality free content.

Beyond hurting apps and websites, many in the small business community say this change will be devastating for them too, at a time when they face enormous challenges. They need to be able to effectively reach the people most interested in their products and services to grow.

Forty-four percent of small to medium businesses started or increased their usage of personalized ads on social media during the pandemic, according to a new Deloitte study. Without personalized ads, Facebook data shows that the average small business advertiser stands to see a cut of over 60% in their sales for every dollar they spend.

Get the full story at fb.com/Apple PolicyUpdate
-----

In September, Apple delayed the rollout of an iOS 14 feature that will require developers to get user permission before enabling in-app ad tracking. It's estimated that besides small businesses, publishers could see their in-app ad revenue drop 50% once the feature is enabled.

Despite the delay, Apple says it is 'full committed' to implementing the feature and is just giving developers time to make necessary changes. 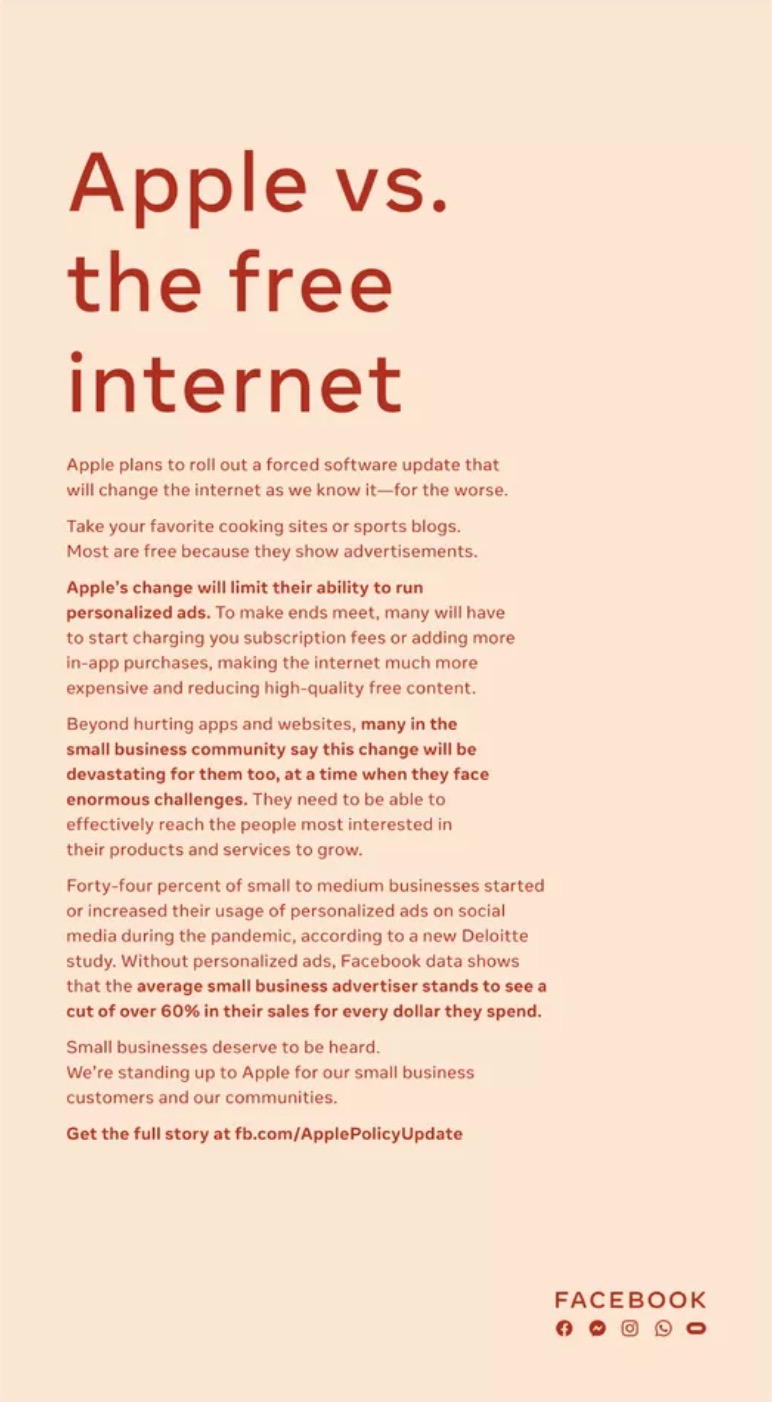 PaulieP - December 19, 2020 at 2:12pm
Facebook is a bully and only cares about their bottom line being affected. Thank you Apple for looking after our privacy.
Reply · Like · Mark as Spam

DMontez - December 17, 2020 at 8:58pm
Apple should start a social media service called Applebook; then all would be fair in the competitive world - those who want intrusiveness can stick with FB, those who want privacy and more control, 🙋🏽‍♂️, can use AB. Apple please hurry with this OS update - please
Reply · Like · Mark as Spam