It appears that Apple's A13 and A14 processors will outperform the Qualcomm Snapdragon 888 SoC when it arrives next year.

Looking at GFXBench, the S888 scored 86.00 in peak performance compared to the A13 at 91.62 and the A14 at 102.24. Absent were sustained performance scores which AnandTech says will be dependant on power consumption.

While the Snapdragon 888 doesn’t look like it’ll match the peak performance scores of the A13 or A14 SoCs used in Apple's iPhones, sustained performance will depend quite a bit on the power consumption of the chip. If this lands in at between 4 and 4.5W, then the majority of flagship Android phones in 2021 will likely be able to sustain this peak performance figure and allow Qualcomm to regain the mobile performance crown from Apple. Otherwise if the chip has to significantly throttle, then 888 will probably fall short of retaking the crown. But even if that's the case, for Android users it shouldn't matter too much: the generational leap over 2020 phones would still be immense, and by far one of the largest GPU performance leaps Qualcomm has been able to achieve to date. 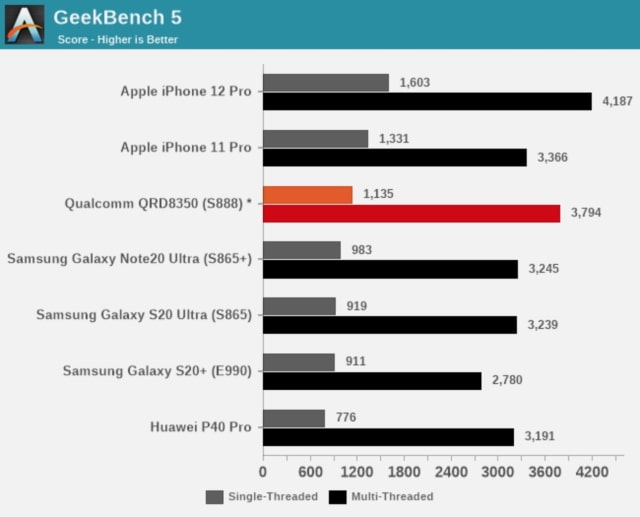