Apple's definitive proxy statement filed with the SEC reveals its executive compensation for 2020.

Apple notes that the final tranches of time-based and performance-based RSUs from Mr. Cook’s 2011 RSU Award are scheduled to vest in August 2021.

During 2021 we will also mark the tenth anniversary of Mr. Cook’s leadership as Apple’s CEO. The Board believes Mr. Cook brings unparalleled innovation and focus to the CEO role, demonstrates what it means to lead with values and integrity, and consistently delivers incredible results for our shareholders. Since his promotion to the role of CEO on August 24, 2011 through the period ended September 25, 2020, Apple’s market capitalization increased by more than $1.5 trillion and Apple’s total shareholder return, including reinvestment of dividends, was 867%. In recognition of his outstanding leadership and with great optimism for Apple’s future as he carries these efforts forward, Mr. Cook was granted an RSU award on September 27, 2020, the first day of Apple’s 2021 fiscal year. The RSU award was determined taking into consideration the size, scope, and success of Apple, and Mr. Cook’s tenure and performance as CEO. This is the first RSU award granted to Mr. Cook since his promotion to the role of CEO in 2011, and will better align his time-based and performance-based equity incentives with those granted to our other named executive officers.

More details in the full proxy statement linked below... 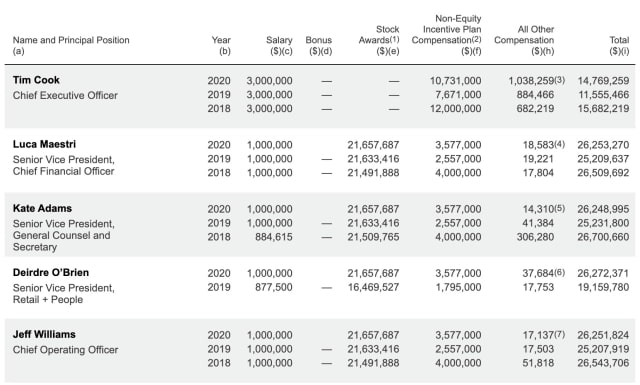