The iTunes 9.1 update reportedly stops iPhones and iPod touches that are tethered jailbroken with BlackRa1n from being able to reboot.

iH8Sn0w has since released a blackra1n fix for iTunes 9.1 which can be downloaded from here. Both 32Bit + 64Bit are supported.

Please note this is not an official update from Geohot. Its unclear if he plans to release one. 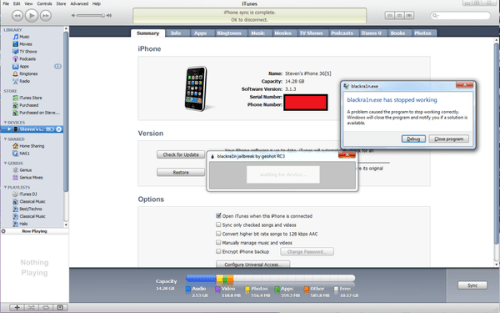 Gurkha - March 31, 2010 at 6:01am
This is why you don\'t jump on the update bandwagon the second it is available. You have to always assume that an UPGRADE will break a HACK.....Seriously, hacking 101 people. Regardless of Apples intention to break the hack or just Apple making the software they provide working for the devices they sell and the hack suffering because of it, it\'s your own damn fault for upgrading.
Reply · Like · Mark as Spam

eLL Mobile Maldives - March 31, 2010 at 2:38am
i\',m unable to sync tunes with my jail broken ipod touch today.but after i restore to factory setting its working.i\'m running itune 9.0 thanks. www.ellmobile.com
Reply · Like · Mark as Spam