These are instructions on how to securely erase your iPhone or iPod touch to prevent the recovery of private data.

Step One
Launch iTunes by selecting its icon in the dock

Step Two
Connect your iPhone or iPod touch to the computer then select it from the list of devices on the left. 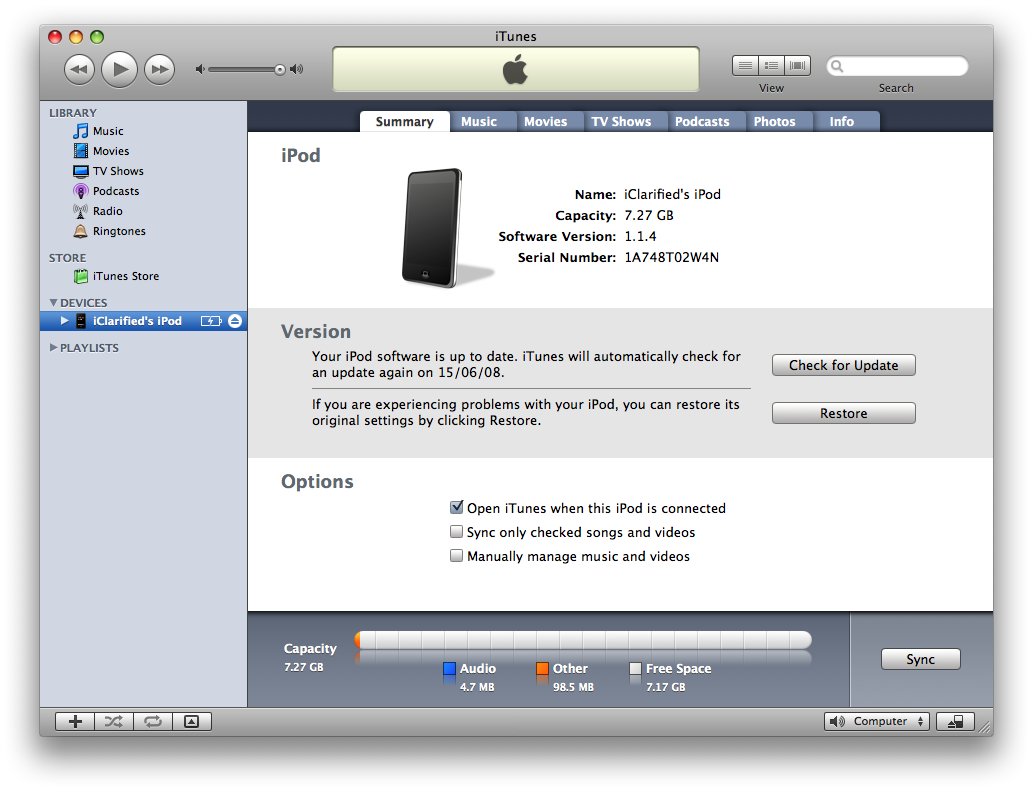 Step Three
Click the Restore button in the Summary tab.

If asked to create a backup click Don't Back Up

A popup window will appear asking you to confirm the restore. Click the Restore button.

Once the Restore has complete a window will appear confirming that your iPhone, iPod has been restored to factory settings. Click the OK button.

Now you will be asked to name your iPhone, iPod touch. Enter a new name then click the Done button.

Step Four
Now follow your desired method to jailbreak your iPhone. If you do not have a preferred method then use one of the many detailed on this site!

Step Five
Now you will need to install BSD Subsystem and SSH on your iPhone. You can do this by using these tutorials...

Install SSH: How to Install OpenSSH on Your iPhone Using Installer

NOTE***: To make sure SSH connections do not terminate I would suggest setting Auto-Lock to Never in Settings:General:Auto-Lock.

Step Six
Download umount from here and save it to your Desktop. 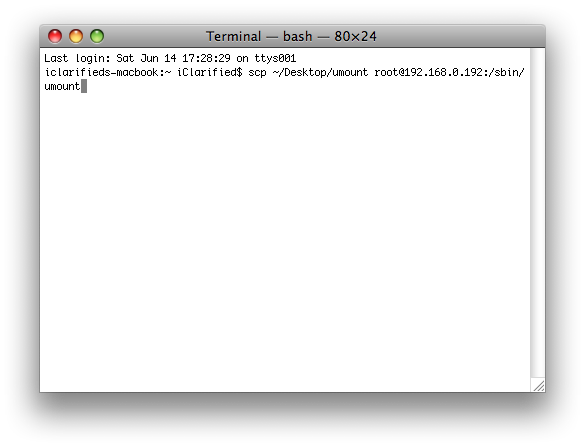 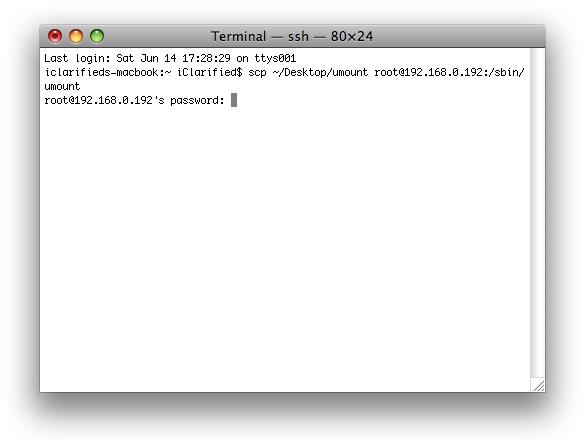 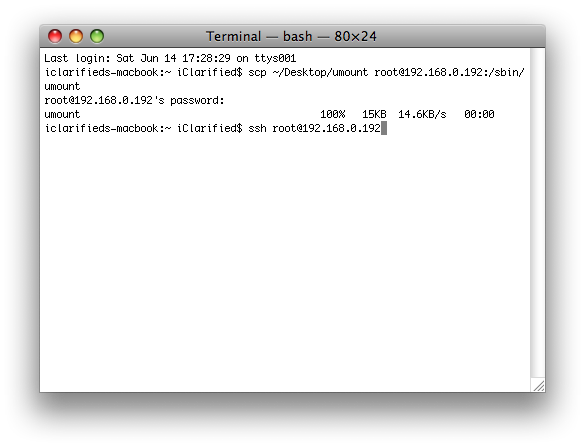 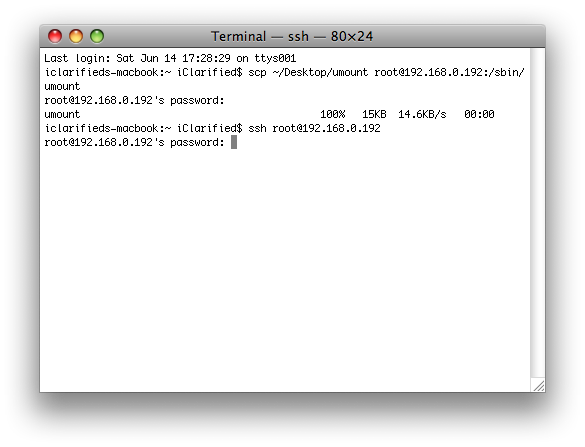 Step Ten
Now we need to give umount the executable permissions. Type the following into your Terminal window:
chmod 755 /sbin/umount 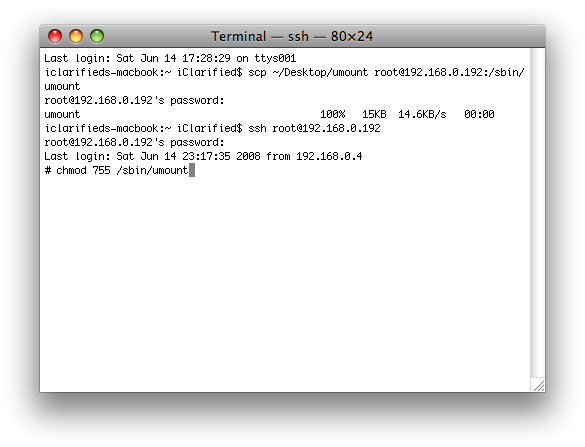 Step Eleven
To force both mount points in to read only mode, enter the following commands into Terminal: 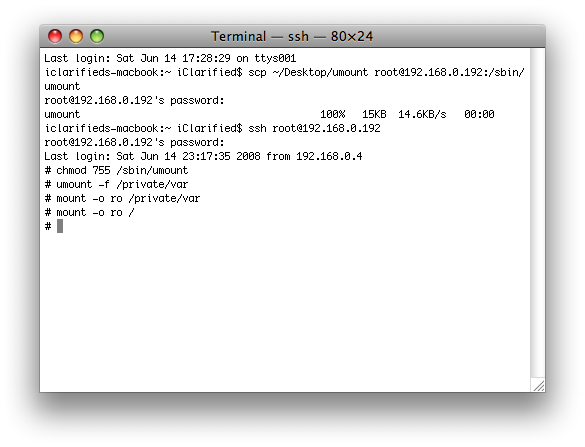 Step Twelve
We now will wipe both partitions clean by copying /dev/zero over them. Enter the following commands into your Terminal window:

NOTE*: This will likely take up to an hour to complete! After completion your iPhone, iPod touch GUI will be unresponsive. This is expected.

Step Thirteen
We will now place the iPhone, iPod touch into recovery mode. You can follow the instructions here for a detailed explanation. Though all you need to do is press the Sleep/Wake button and Home button until the iTunes logo and dock connector appear on the screen.

Step Fourteen
Follow Steps One through Three again to restore your iPhone, iPod touch. Your iPhone will now be securely erased and ready for resale.

Davo - October 31, 2010 at 10:44am
Wipe iphone 4 system clean E-mail 此主題給朋友 [按此打開] [隱藏] Iphone 4 16g, with Limera1n jailbroken, 4.1. I tried to wipe the whole file system clean by writing zeroing data, but encountered the following problem: I successfully sshed into the device, and force the two partitions (root partition and media partition) to read only mode, but have to unmount the media partition before doing that. So when typing the following command "umount -f /private/var" the system returns the error with "not a directory or special device" So anyone knows what's the cause? Thank you
Reply · Like · Mark as Spam
0

Zoso - February 4, 2009 at 3:51pm
Does this work on windows? And it's like this that the iPod on my iPhone have for no special reason disappeared, do I get it back if I restore using iTunes?
Reply · Like · Mark as Spam
0

Pissy - October 31, 2010 at 12:15pm
DAVO YOU NEED TO CONNECT IT TO UR PC AND DO THIS:...TRY TO JAIL BREAK IT WITH A DIFFERENT FIRMWARE THEN WHAT YOU NOW HAVE ON YOUR IPHONE BY DOING THIS YOU SCRAMBLE UP YOUR OWN FIRMWARE AND ALL WILL BE WIPED CLEAN THEN YOU DO A COMPLETE RESTORE LEAVING YOU AND ALL YOUR DIRECTORIES CLEAN AS A BABYS ASS
Reply · Like · Mark as Spam
0

drkfd - September 16, 2008 at 11:44pm
Hey, Good stuff. Just curious: Anyone trying this with 2.1 firmware? When I run umount I receive "Killed" immediately. Doesn't seem to be working. I thought maybe there was an updated version of umount in the 2.1 build, but I can't find it anywhere. Any thoughts? Maybe this is no longer necessary due to the new erase features in 2.1? Thanks.
Reply · Like · Mark as Spam
6 More Comments
Recent