Rumors that the next generation iPad will feature an SD Card slot may be incorrect, according to an AppleInsider source.

In a mockup analysis of all the openings and recesses in those cases, it was speculated that that left-side opening could represent the much-rumored SD Card slot. However, a person that AppleInsider trusts on matters such as these has since rebutted that notion, stating instead that the break in the next-gen iPad enclosure at that location is actually a relocation of the tablet's SIM card slot. (This could signal a smaller logic board in the next iPad and better battery life via and even larger battery).

That being said, Engadget's report on the iPad 2 having a SD Card slot was also from a 'concrete' source. No one really know what will be released until it actually is... 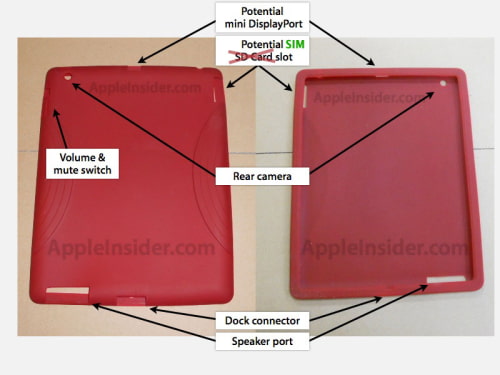 AnotherBrian - January 29, 2011 at 10:08am
I don\'t think apple will add a SD slot, it\'s not like them to give you anything that can plug into a iPad or iPhone. They want most everything to transfer over air. It seems like you would sinc with iTunes over the air, the must be worried about security because they are all about air or not letting you connect other devices.
Reply · Like · Mark as Spam

RC - January 28, 2011 at 11:37pm
OMG people ! Apple WOULD NEVER add SD card slot on iPhone, iPad or iPod Touch ! it beats the purpose of coming out with different models with different capacity ! deal with it and stop this nonsense news !
Reply · Like · Mark as Spam

SunLizard - January 29, 2011 at 3:38am
Nah, I don\'t agree with you\'re reasoning there. I think it is more likely a technical reason. Mechanically, its a part that is prone to breakage/gumming up in a cell phone for hotswap, and it would kill aesthetics if it were covered port. The other technical issue that makes it less viable is power consumption. I believe its 3.6V standard. My contention is that the most revolutionary piece of tech in the iDevices in recent years is the battery. No other company comes close. To maximize that you can\'t be interfacing with a peripheral device all the time. That\'s why I don\'t see them supporting anything other than picture extraction for a long long time. My two year prediction is that Apple with partner with a bunch of industry folks (Toshiba/Samsung) on an new ultra-low power consumption external SDHC type device. It won\'t be proprietary (like Sony MS) but it will be the next standard. Take that to the bank.
Reply · Like · Mark as Spam