Facebook has hired Geohot, the popular hacker behind the iPhone and Sony Playstation jailbreaks, reports TechUnwrapped.

Joshua Hill (P0sixninja) recently mentioned in an interview that Geohot is trying to avoid the limelight after his legal battle with Sony and is concentrating on his day job at Facebook.

We wish Geohot the best of luck at Facebook but also hope he has some time left to contribute to the iPhone community. 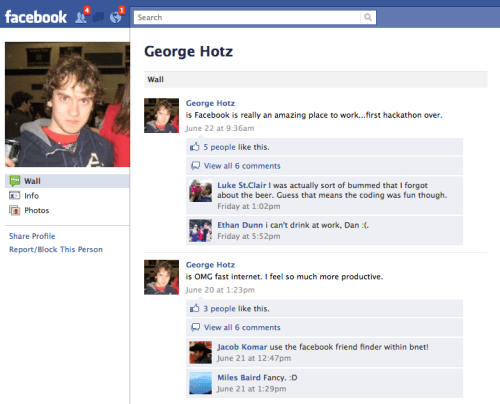 F. Uck_Off - June 28, 2011 at 7:20am
so all you out there that supported Goehot during the Sony debacle...if you have a facebook account you should be very worried. Facebook hired him of one reason only...to hack into everyone facebooks account activities. har har har har.
Reply · Like · Mark as Spam

steve - June 27, 2011 at 6:04am
No one can sign.into facebook.no more after update using a mobile and facebook are ignoring the problem so hopefully geohot might use his noging.to sort it out lol
Reply · Like · Mark as Spam

Bin wackin - June 27, 2011 at 2:16am
I was wondering how much is getting paid by facebook? .probably 100 grand a yr... If I had the money I would pay Geohot $500,000 to challenge him for an Ipad2 JB and unlock Iphone 4 ? Geohot is a clever fellow...I respect him Thanks Geohot for the opportunity you have giving us to jailbreak our devices
Reply · Like · Mark as Spam

gus - June 27, 2011 at 12:31am
OK, OK, OK, the only one doing something for the JB is gone, all the other posers are being paid by apple or not doing a shit... Dev team and chronic team, my ass, bunch of posers, since 4 months ago they are saying they will release the Ipad2 JB and we are still waiting, and the JB is based on Limerain, which was done by Mr. Hotz, so at the end they based their job in Geohot, so we lost the guy, forget about a JB again...
Reply · Like · Mark as Spam