Apple has filed for a ban of the Samsung Galaxy Tab 10.1 in the United States after recent ruling by the Court of Appeals for the Federal Circuit (CAFC) which sided with Apple on whether an iPad design patent (U.S. Patent No. D504,889) is valid, reports FOSS Patents. The request comes just three days before the two companies are set to meet for settlement talks in San Francisco.

Apple's motion is fairly likely to succeed. If and when it does, there will be formal U.S. bans in place against all three of the leading Android device makers. Also on Friday, the ITC ordered a U.S. import ban against Motorola's Android-based devices (to the extent those infringe a particular Microsoft patent), and in December, the U.S. trade agency also banned HTC's products that infringe a particular Apple patent -- as a result, two HTC product rollouts just got delayed.

Apple proposes to give Samsung until May 25 to respond after which it will file its reply brief. The companies will meet for settlement talks before then; however, little is expected to come from the talks. 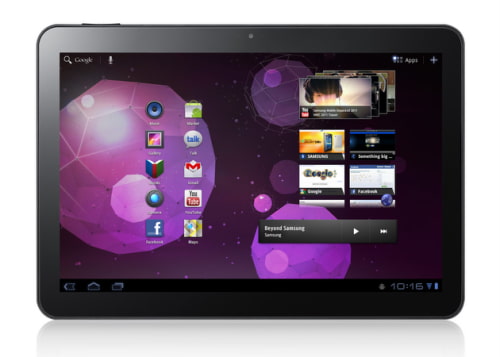 tired of the crap - May 21, 2012 at 7:36pm
Apple seems to think they are the only company on the planet that has rights and innovative ideas. You are a company that is against evolving technologies, unless YOU are the company with the idea. This anti competitive attitude is disgusting and will only hurt any new ideas and designs. Apple and the lawyers seem to want to destroy and other company on the market that is not PRICE GOUGING, not all consumers can afford to be buying Apple product, no matter how innovative and solid design and operation they deliver to the market place. Stop this anti competitiveness and the waist of the use of the court system to delay other companies from designing and selling their ideas in the marketplace.
Reply · Like · Mark as Spam

Arif munshi - May 20, 2012 at 9:02am
Tablets and smartphones they're all the same, they're computers with a touchscreen so how different can they look! It's the software that counts and even then the designers are going to be running out of ideas soon.
Reply · Like · Mark as Spam

duh - May 20, 2012 at 3:54am
don't you dumbasses realize that competition is always good for the end user / consumer... in other words, faster technology advancements and cheaper prices. ...retards
Reply · Like · Mark as Spam
5 More Comments
Recent