Happy Gilmore is smiling somewhere due to the release of Golf Smak! by Marvel Apps, LLC. Golf Smak! utilizes over fifty unique sayings and sound effects to complement, ridicule, or heckle your fellow golfers with the tap or shake of an iPhone or iPod Touch. You can heckle anytime with a shake of the iPhone as the device's accelerometers trigger the sound. The app features one view with great visuals and has unique sayings for a driver, iron, or putter so that they make sense when used.

Tecumseh, Michigan - Golfing just became more fun with the release of Golf Smak! for Apple's iPhone by software developer Marvel Apps, LLC. Golf Smak! contains a library of over fifty unique sounds and sayings that enable the user to complement, ridicule or heckle their fellow golfers. You can heckle anytime with a shake of the iPhone as the device's accelerometers trigger the sound.

The application features many familiar and funny golf sayings such as the Caddyshack inspired, "It's in the Hole!", "Hit it Alice", "You're the Man!", and many more. Get under the skin of that serious golfer in your group or use the app to lighten up league play, a scramble or corporate outing. Bill Leisenring, President of Marvel Apps, said "We are very excited about this product as we had a great time developing this application. This app extends the usefulness of the iPhone and adds another dimension to a round of golf. We were inspired by other successful sound apps Sound Grenade and iFart. Customers clearly enjoy these apps and combining this concept with Golf was a great fit. A demo of the app is featured on our company's web site and the feedback has been great."

The integration of a sound effects app and Golf was well done by Marvel Apps. The app features one view with great visuals and has unique sayings for a driver, iron, or putter so that they make sense when used. "Our team is comprised of several avid golfers and a lot of care was put into the app so that it made sense, had depth, and most importantly was funny. We also spent a lot of time on optimizing the randomness logic in order to avoid the sense of repeats." said Leisenring. Additionally, Marvel Apps is planning on providing regular updates to the app to keep it fresh, "We are taking a page from Harmonix's Rock Band product which releases new songs every week. We plan on adding more sayings and sounds regularly to keep the replay value of the app high." added Leisenring. 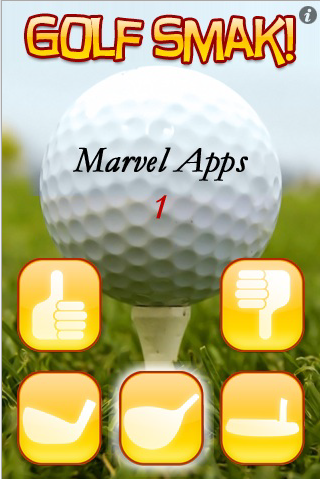 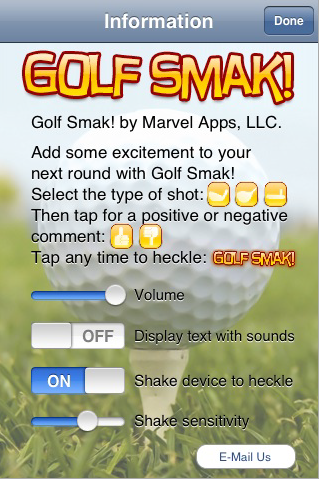