Chinese hackers have reportedly cracked the algorithm Apple uses for its iTunes Gift Cards and created gift certificate generators to profit from sales of the codes.

According to OutIndustry, sellers pay a certain amount to the hackers for access to their generators and then they sell the codes direct to customers online.

"Choose one seller whose Taobao IM is online, talk to him a little bit, purchase his product and pay money to Taobao's online payment system, Alipay, which supports most banks in China," the report says. "All the seller actually sells is the gift voucher code which they send you directly through Taobao's IM software. You can then redeem the card in your iTunes account."

"We make more money as the amount of customer is growing rapidly," said the owner of the Taobao shop contacted for Outdustry's story. He also acknowledged having paid the hackers an undisclosed sum for use of their iTunes Gift Certificate generators. "The hackers are based in China, but I don't know if they do the same thing in eBay," he said. 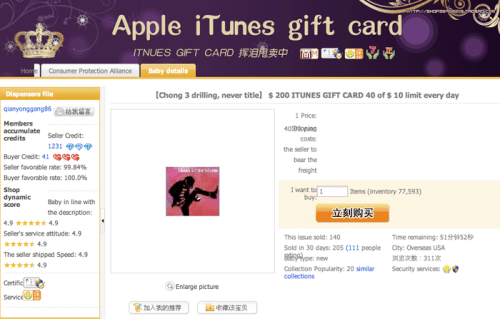