Apple Shares 'How Jeff, the Robot, Came to Life' [Video]

Apple has released iOS 8.2 for the iPhone, iPad, and iPod touch featuring support for the Apple Watch.

This release introduces support for Apple Watch, and also includes improvements to the Health app, increased stability and bug fixes.

This release introduces support for Apple Watch, and also includes improvements to the Health app, increased stability and bug fixes.

Health app improvements
• Adds the ability to select the unit of measurement for distance, body temperature, height, weight and blood glucose
• Improves stability when dealing with large amounts of data
• Includes the ability to add and visualize workout sessions from 3rd-party apps
• Addresses an issue that may have prevented users from adding a photo in Medical ID
• Fixes units for vitamins and minerals
• Fixes an issue where Health data wouldn’t refresh after changing data source order
• Fixes an issue where some graphs showed no data values
• Adds a privacy setting that enables turning off tracking of steps, distance and flights climbed 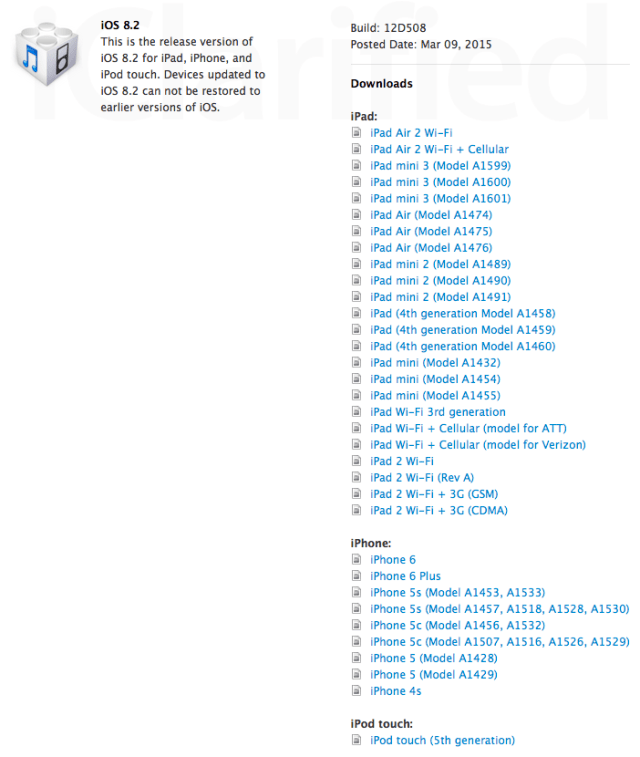 sHithead - March 10, 2015 at 4:01pm
I find this update perfect than ever before! Nothing wrong even from testing out what Apple had fixed!
Reply · Like · Mark as Spam

Refused - March 10, 2015 at 1:32am
The update puts a watch icon on your screen that you can't get rid of, didn't you learn from the U2 album that people don't like you sticking stuff on their phones that they can't remove
Reply · Like · Mark as Spam
5 More Comments
Recent