CrumplePop has released CrumplePop ShrinkRay, an effect for Final Cut Pro that uses tilt-shift photographic techniques to make large scenes appear startlingly tiny, whether it is trees, buildings, people, or mountains. ShrinkRay is available as a free download from the CrumplePop web site for one week, starting today.

With ShrinkRay, you can create mesmerizing tilt-shift scenes by simply dragging and dropping the ShrinkRay effect onto the Final Cut Pro timeline. Wide shots of crowds, urban canyons, forests, or rivers suddenly appear as miniature versions of themselves, creating a remarkable new way to look at and understand our built environment and natural surroundings.

Because ShrinkRay is based on Apple's Master Template architecture, busy editors can use ShrinkRay right inside Final Cut Pro, saving the time and expense of a visit to a VFX shop.

"Using tilt-shift photographic techniques to miniaturize scenes has only become popular relatively recently," said Jed Smentek, lead designer at CrumplePop. "Several photographers, most notably Keith Loutit in Australia, have blazed the trail here with some remarkable videos on the web. Our contribution with ShrinkRay is to make the effect accessible to a broader audience of FCP editors, by placing it right inside of Final Cut. This is such an incredibly fun and eye-catching technique, and we wanted to create a dedicated tool to make it simple."

CrumplePop ShrinkRay lets you apply a new focal area to any footage, and then reposition, expand, or contract that focal area for maximum effect, all from within Final Cut Pro. ShrinkRay also lets you add additional focus or additional defocus areas - for instance over trees or light posts - to make the effect more photorealistic.

Pricing and Availability:
CrumplePop ShrinkRay can be downloaded for free for one week from the CrumplePop web site. 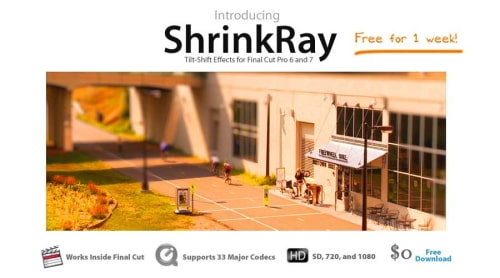