Cramzy has announced 18,000 COOL JOKES 1.1, an update to their popular laugh database for iPhone and iPod Touch. Designed specifically to take advantage of the iPhone's unique capabilities and interface, 18,000 COOL JOKES is a huge database organized into 50 popular categories, including longtime favorites such as blonde jokes, yo mamma jokes, Irish jokes, political jokes and much more.

Perfect for the office, shop, parties, and social gatherings, 18,000 COOL JOKES is sure to raise everyone's giggle factor. All jokes are contained within the database and placed on the device, so the application does not require users to have an internet connection. With the app's built-in algorithm, all jokes are displayed in random order ensuring that the same joke is never read twice. Users can add and/or remove jokes to their Favorites list to easily come back to them, as well as share jokes by emailing them to family, friends or colleagues.

"I am a huge jokes telling fan," said Iliya Yordanov, co-founder of Cramzy. "One day I was short on jokes so I've decided to download a jokes app from the App Store. You can imagine my frustration when I found out there was not one really good jokes app that stood out. That is how 18,000 COOL JOKES came into being."

Among 18,000 COOL JOKES unique features is its support for filtering. Jokes can be easily filtered by length. Categories are divided into three parts; short (up to 200 symbols), medium (up to 1200 symbols) and long (more than 1200 symbols), allowing users to filter to a preferred length, suitable for the occasion or timing. Additionally, users can easily switch to a new joke by simply shaking the device. This feature can be enabled/disabled in preferences.

Version 1.1 adds more than 600 jokes in 2 new categories, sports a new app icon, tweaked graphics, bug fixes, many spelling errors were fixed, and introduces easy sharing capabilities. Just click the share icon and pick where to share the joke. With the new feature, sharing jokes securely among friends via email, Twitter and Facebook has never been easier. All account credentials are stored on the device. The new version also features automatic database migration to allow automatic updating for owners of previous versions.

Pricing and Availability:
18,000 COOL JOKES 1.1 for iPhone is only $0.99 (USD) and available worldwide, exclusively through the App Store. 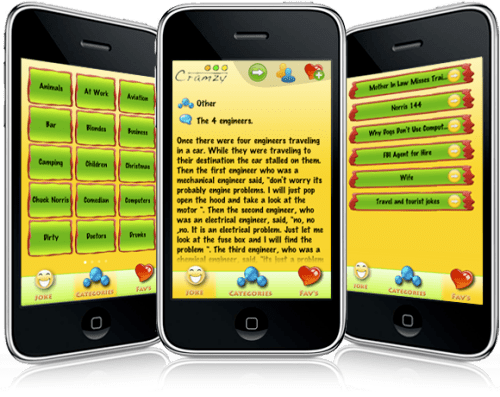