Geohot, the first person to unlock the original iPhone, has built a self driving car in just one month in his own garage.

Geohot has equipped a 2016 Acura with graphics chips that normally power video game consoles and Intel chips to run his AI calculations. The car also features six cameras -- similar to the ones found in smartphones -- to gather data and images surrounding the vehicle. It has a 21.5-inch monitor and joystick controller that enables self-driving mode. Geohot says his costs to develop the system are $50,000 thus far -- with most of that consisting of the car itself ($30,000). 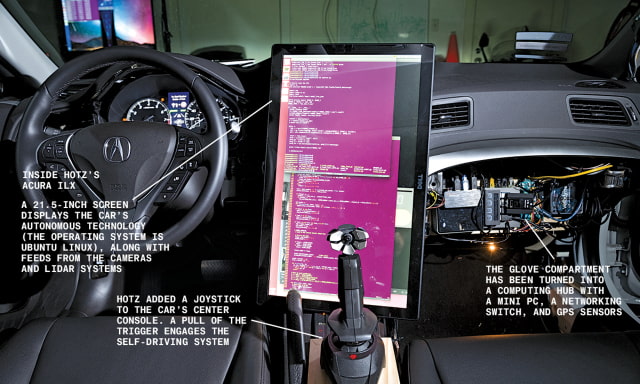 Part of what motivated Geohot to build the car was a bet with Telsa's Elon Musk. Tesla currently gets its driver-assist technology from Mobileye, a company that Geohot says is "behind the times" with the technology.

There was a proposal that if Hotz could do better than Mobileye’s technology in a test, then Musk would reward him with a lucrative contract. Hotz, though, broke off the talks when he felt that Musk kept changing the terms. “Frankly, I think you should just work at Tesla,” Musk wrote to Hotz in an e-mail. “I’m happy to work out a multimillion-dollar bonus with a longer time horizon that pays out as soon as we discontinue Mobileye.”

“I appreciate the offer,” Hotz replied, “but like I’ve said, I’m not looking for a job. I’ll ping you when I crush Mobileye.” Musk simply answered, “OK.”

Geohot says his approach is different than what most autonomous vehicle technology consists of. He says he's come up with some discoveries that improve how AI software interprets data coming from cameras. In essence, instead of writing hundreds and thousands of lines of code to tell the vehicle what to do in certain scenarios, Geohot has developed a "deep-learning" way for the vehicle to simply learn what to do after being manually driven around. Geohot's software is based on just 2,000 lines of code and he has even launched his own company, comma.ai.

The major advance he will discuss is the edge that deep-learning techniques provide in autonomous technology. He says the usual practice has been to manually code rules that handle specific situations. There’s code that helps cars follow other vehicles on the highway, and more code to deal with a deer that leaps into the road. Hotz’s car has no such built-in rules. It learns what drivers typically do in various situations and then tries to mimic and perfect that behavior. If his Acura cruises by a bicyclist, for example, it gives the biker some extra room, because it’s seen Hotz do that in the past.

Besides unlocking the original iPhone, Geohot also jailbroke the PS3, released his own Android root, and much more. Geohot has worked at Google, Facebook, SpaceX, and more. 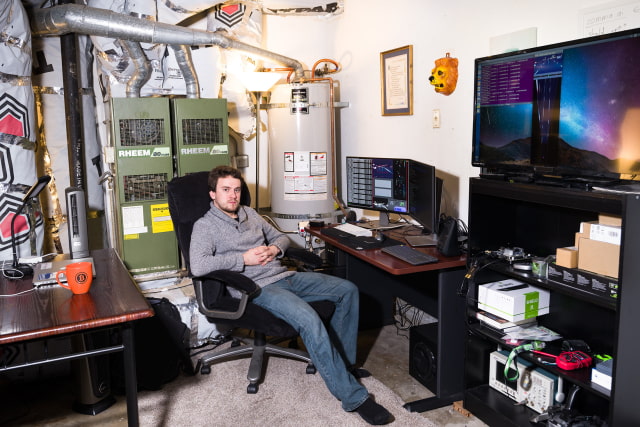 Bill Gates - December 18, 2015 at 11:04am
God I absolutely love this guy, have followed since 2007 and he never ceases to amaze me. Way to go Geohot!!! I'm rooting for you to be the next billionaire, amd I will buy your technology in a heartbeat :).
Reply · Like · Mark as Spam

MannyG - December 18, 2015 at 12:47am
This is amazing. This guy is a genius. I hope this really kick starts something real. Brains like this only come every so often. Happy to be living in an era when this stuff is developed. It's enough to keep fighting to live. Way to go GeoHot.
Reply · Like · Mark as Spam

ILLuises - December 17, 2015 at 9:41pm
My understanding of geohotz research is that he Ai would assess road situations the very way us humans would and act appropriately as suggested the codes are not derived from if then functionality but rather an observatory learning mechanism that gradually learns different things and responded to those things. No like humans there is nothing called absolute safety either re driving on the road hence why there are accidents and deaths but if one can get the AI TO Act independently Of if then functions and be more intuitive then that's ground breaking
Reply · Like · Mark as Spam
25 More Comments
Recent