The Apple TV is falling further behind its rivals and will continue to do so, according to a new report from eMarketer.

The use of connected TV devices is soaring with 168.1 million people in the US using an internet-connected TV this year, up 10.1% over 2016. Notably, Smart TV users will make up nearly half that number, with 81.2 million users in 2017. That's a sharp increase of 30.8%. The surge of Smart TV users has led eMarketer to revise down its forecast for third party connectivity devices. 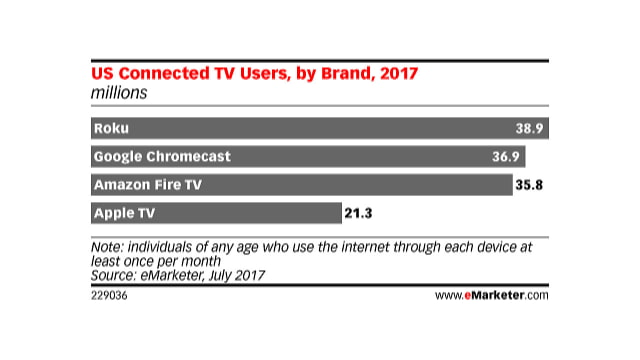 “As the only major market participant not affiliated with a content or TV device platform, Roku has used its neutrality to strike deals with a wide range of partners, including smart TV makers, over-the-top (OTT) service providers and social media companies,” said Paul Verna, principal video analyst. “That expansive strategy, combined with the company’s broad selection of connectivity devices at various price points, has put Roku at the head of the pack.”

eMarketer says the Apple TV comes in at a distant fourth with 21.3 million users this year (12.7% of US connected TV users). It also predicts that the Apple TV will continue to fall in popularity, adding less than 4 million users by the end of 2021 compared to 20-30 million for its competitors.

“Apple TV has been held back by the absence of a compelling content offering, a lack of support for increasingly popular Amazon video content and a much higher price bracket than its competitors,” Verna said. “Apple TV devices currently start at $150, whereas Google, Amazon and Roku all sell streaming sticks that are priced well below $40.” 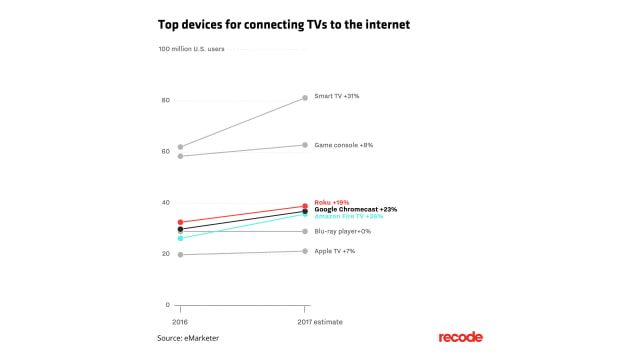 drigo marki - July 27, 2017 at 5:15pm
Fire TV beats ATV anytime. I love feeling not to worry about updates that will kill Kodi. Never again ATV.
Reply · Like · Mark as Spam

JW - July 27, 2017 at 4:59am
Why? Apple tvs are too locked down. My ATV4 has been relegated to the bedroom since I got a sheild. One free app and i can airplay to it also. Im an apple fan, but in the tvbox world they are lame.
Reply · Like · Mark as Spam

M&MM - July 27, 2017 at 11:06am
Yeah... WHY? I have bought appleTVs in the past and enjoyed the integration with iPhone, iPad and the Mac to stream e.g. From my iPad Netflix to the TV (even though that often crashes), BUT why should I pay soooo much for that? The new appleTVs are simply waaaaay too expensive. This is not complaining about the usual Apple premium price, but about a price that just is in absolutely no range of the value provided for whatever use case this device would be able to cover... Tim Cook run the relatively affordable and relatively successful hobby into the ground for good.
Reply · Like · Mark as Spam
6 More Comments
Recent