Apple has released iOS 12 beta 10 to developers for testing. The build number is 16A5364a.

As usual, Apple says this beta version of iOS should only be deployed on devices dedicated for iOS 12 beta software development. Developers can download the new beta from the link below. A public beta of this firmware is also available.

Previous betas brought numerous discoveries about Apple's future plans including the resolution of the iPhone X Plus, support for dual-SIMS, the shape of the new iPad Pro and its display, and more. Unfortunately, beta 7 revealed that Apple has delayed the launch of Group FaceTime. 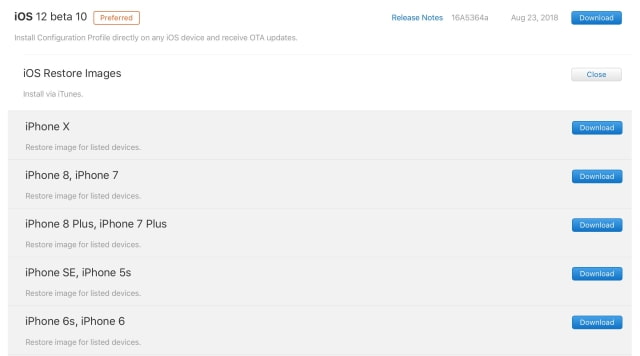 alinboy - August 25, 2018 at 3:54pm
I wish apple bring a future like: when we using airpods or plugs and we receiving a notification like messages or someone calling to not be that loud the ring or alert, because now is bad if you listing music the notifications from messages is very loud and another notifications:((too! Needs some great futures l.. like dark mode and more
Reply · Like · Mark as Spam
Recent