David Einhorn's Greenlight Capital has sold its remaining shares in Apple over concerns that China could retaliate to U.S. trade policies, reports CNBC.

"We ultimately sold because our differentiated thesis from 2011 has become consensus," Einhorn said. "We are somewhat worried about Chinese retaliation against America's trade policies."

In the previous quarter, Greenlight reduced its stake in Apple by 77% (486,000 shares) and then it sold the remaining shares on August 31st at $228. Since purchasing the stock in 2010, Greenlight says its clients have made over $1 billion on it. Apple shares dropped 2.4% on the news.

CNBC notes that Greenlight has not had a good year. The firm lost 9.1% last quarter and is down 25.7% on the year. Einhorn says the situation is similar to when it bet on Apple in 2013 despite it dragging down the portfolio. "It basically feels the same today – but now the market appears to be rejecting our entire strategy of value investing," Einhorn said. "Just like with [Apple] in 2013, few agree with us on most of our positions." 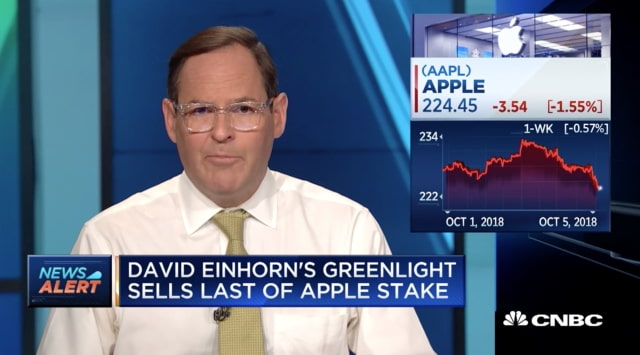 stevenlacross - October 5, 2018 at 8:51pm
Wait they sold their share aug 31st? A month before the news article came out? I don’t think they sold because of the hack, I think they are idiots and sold because they are losing money and don’t know what the hell they are doing.
Reply · Like · Mark as Spam

stevenlacross - October 5, 2018 at 8:46pm
It probably will, this company is losing money so they decide to sell Apple and watch, apples stock are going to keep going up and they will lose more money because they sold all their shares
Reply · Like · Mark as Spam
Recent