Premium Subscribers grew to 100 million, up 32% Y/Y, reaching the high end of our guidance range of 97-100 million, and marking an important milestone in Company history. Outperformance was driven by a better than plan promotion in the US and Canada and continued strong growth in Family Plan.

The company says it saw strong growth from the expansion of its Google Home Mini promotion, as well as a price reduction to the Spotify Premium + Hulu offering in the US.

-----
In March, we extended our partnership with Google by expanding our Google Home Mini promotion to two new markets, the UK and France. The new promotional offer is substantially similar to the deal offered in the US in Q4. In the UK and France, new and existing Family Plan master account holders can claim a free Google Home Mini voice speaker. We believe that voice speakers are a critical area of growth, particularly for music and podcasts, and we intend to continue to pursue opportunities to expand our presence in that area.

We announced a significant step forward in our ongoing partnership with Samsung during Q1 whereby the Spotify app will be preloaded on millions of new devices globally. New users in the US who purchase Samsung’s flagship Galaxy S10 device with the Spotify app preloaded also will have access to a special six month free trial offer for Spotify Premium.

Additionally, we expanded our partnership with Hulu during Q1 by offering their limited commercial plan to our Standard $9.99 subscribers at no additional charge. This promotion replaces our existing $12.99 Spotify + Hulu bundle and builds upon the success and popularity of our Spotify Student + Hulu plan available in the US.

Family and Student plans continue their fast growth and have continued to increase as a percentage of our total subscribers. Churn was flat with Q4 and also roughly the same as Q1 of 2018.
-----

Spotify's 100 million paid subscribers is nearly double Apple Music's 50 million; however, the WSJ recently reported that Apple Music has surpassed Spotify in U.S subscribers and is growing at a faster rate. 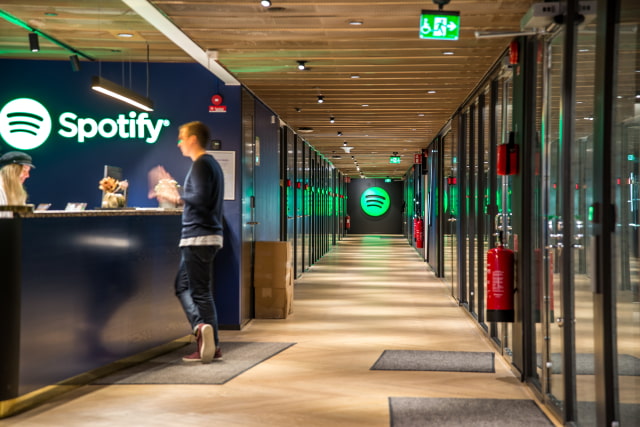 PaulieP - April 29, 2019 at 2:37pm
Greedy blokes still want more money for playing music that they don’t own.
Reply · Like · Mark as Spam
Recent