China has overtaken the U.S. to become the largest smart speaker market, reports Canalys. Last quarter the global smart speaker saw triple digit growth of 131% with 20.7 million units shipped. China accounting for 51% of those shipments compared to 24% for the U.S.

The competitive landscape inside China has shifted significantly. Baidu topped the market for the first time. Baidu had a stellar quarter building up from Q4 last year and the amount of marketing promotion around its smart speakers was unprecedented. The company struck an exclusive sponsorship deal with CCTV, the national TV channel, on its New Year’s Gala on Chinese New Year’s Eve, which is the biggest entertainment show in terms of viewer numbers in China. This sponsorship allowed Baidu to generate significant downloads of its mobile app, which distributes over 100 million coupons to a 1.2 billion audience during the show, and to drive country-wide awareness around its smart speakers. 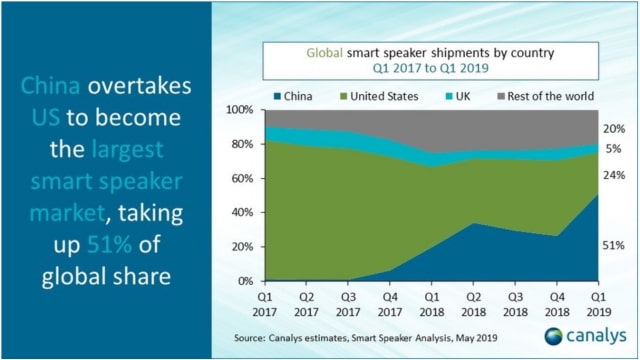 Alibaba and Xiaomi maintained growth during the quarter by promoting gift sales for Chinese New Year; whereas, global vendors like Amazon and Google focused on enhancing interactions with smart assistants.

“Multimodal user interaction is the theme this year. Smart assistants in smart speakers are gaining more capabilities via additional components such as displays, cameras and sensors. However, skills and actions are there to enhance assistants’ abilities to operate and to provide value to users,” said Canalys Senior Analyst Jason Low. “First party smart assistant features such as Google Duplex is attention-grabbing. Yet, the smart assistant ecosystem will only be boundless with the help of the extended developer community.”

Notably, Apple did not make Canalys' list of top smartphone vendors and was relegated to the 'Other' category which had a combined market share of 14.2% in Q1. 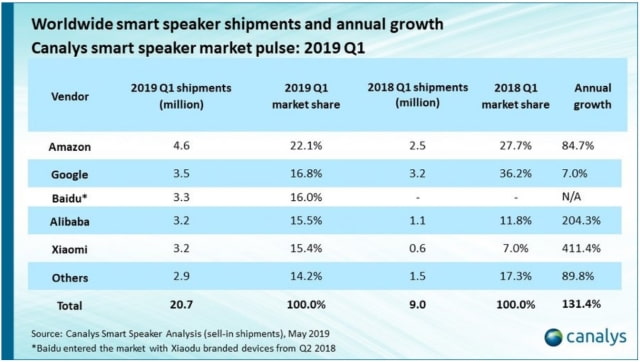