Amazon has become the world's most valuable brand surpassing Apple and Google, according to the latest rankings released today by WPP and Kantar at the New York Stock Exchange.

Amazon’s smart acquisitions, that have led to new revenue streams, excellent customer service provision and its ability to stay ahead of its competitors by offering a diverse eco-system of products and services, have allowed Amazon to continuously accelerate its brand value growth.

David Roth, CEO of The Store WPP EMEA and Asia and Chairman of BrandZ, says: “The growth in value of this year’s top 100 brands to an all-time high proves the power of investing in brands to deliver superior shareholder value. Behind this headline growth figure lies the success coming from a new phenomenon of ecosystem brand building. We’re seeing a move from individual product and service brands to a new era of highly-disruptive ecosystems. Brands need to understand the value this type of model can create and should embrace its approach to be successful in the future.” 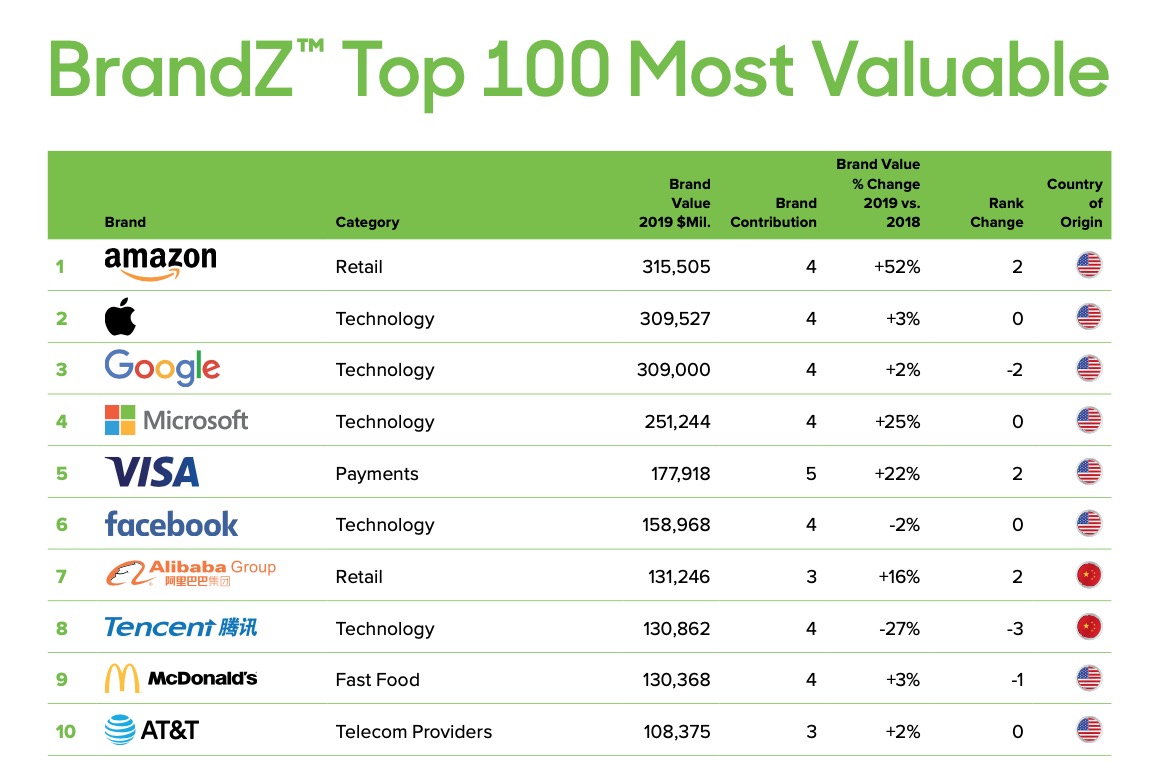 Highlights:
Technology companies have led BrandZ’s Top 100 ever since its first global brand value ranking in 2006, when Microsoft took the top spot. Rising in brand value by an impressive 52% year-on-year to $315.5 billion, Amazon moves ahead of Apple (no.2, $309.5 billion) and Google (no.3, $309.0 billion) which both rose by a modest +3% and +2% respectively, to end the technology giants’ 12-year dominance.

In the Top 10, Facebook remained at no.6 while, for the first time, Alibaba overtook Tencent and became the most valuable Chinese brand, moving up two places to no.7 and growing +16% to $131.2 billion. Tencent dropped three places to no.8, declining by 27% to $130.9 billion year-on-year, in what BrandZ ascribes to a more volatile world; one in which brands must continually anticipate evolving consumer needs and expectations.

As other social media platforms face challenges in terms of trust and desirability, Instagram (no.44, $28.2 billion), now with over 1 billion users worldwide, emerged as this year’s fastest riser climbing 47 places with a massive +95% growth in brand value. Lululemon, the yoga-inspired, athletic apparel company was the second fastest riser, stretching to +77% growth year-on-year to $6.92 billion. 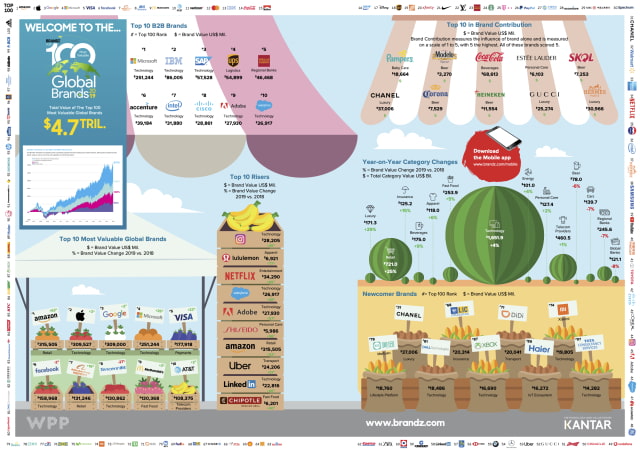 Key Trends:
• Luxury is the fastest growing category (+29%) followed by Retail (+25%), fuelled by the shifting
preferences to digital channels from GenY and GenZ consumers.
• Technology, Finance and Retail categories dominate, accounting for more than two-thirds of
the total value of brands.
• Nine newcomers appear in the Top 100, predominantly driven by Chinese and US technology
brands with disruptive business models including Dell Technologies, Xbox, Haier, Meituan and
Xiaomi.
• Asian brands increase their presence with 15 Chinese, three Indian and one Indonesian brand
making the ranking among a total of 23 from the region, including LIC and Tata Consultancy
Services.
• A new generation of brands emerge – GenZ brands (created after 1996) are miles ahead in
growth rate as they add more value to the ranking per year of existence – almost four times more than brands created in the millennial era of 1977 to 1995. A total of 23 GenZ brands appear in the Top 100 with an average age of 16 years compared to 18 millennial brands averaging 33 years.
• Sustainable brands – Brand owners are demonstrating the importance of improving and reinforcing consumer perceptions that they are ‘responsible’ through social, environmental and corporate initiatives.

Hit the link for the full report! 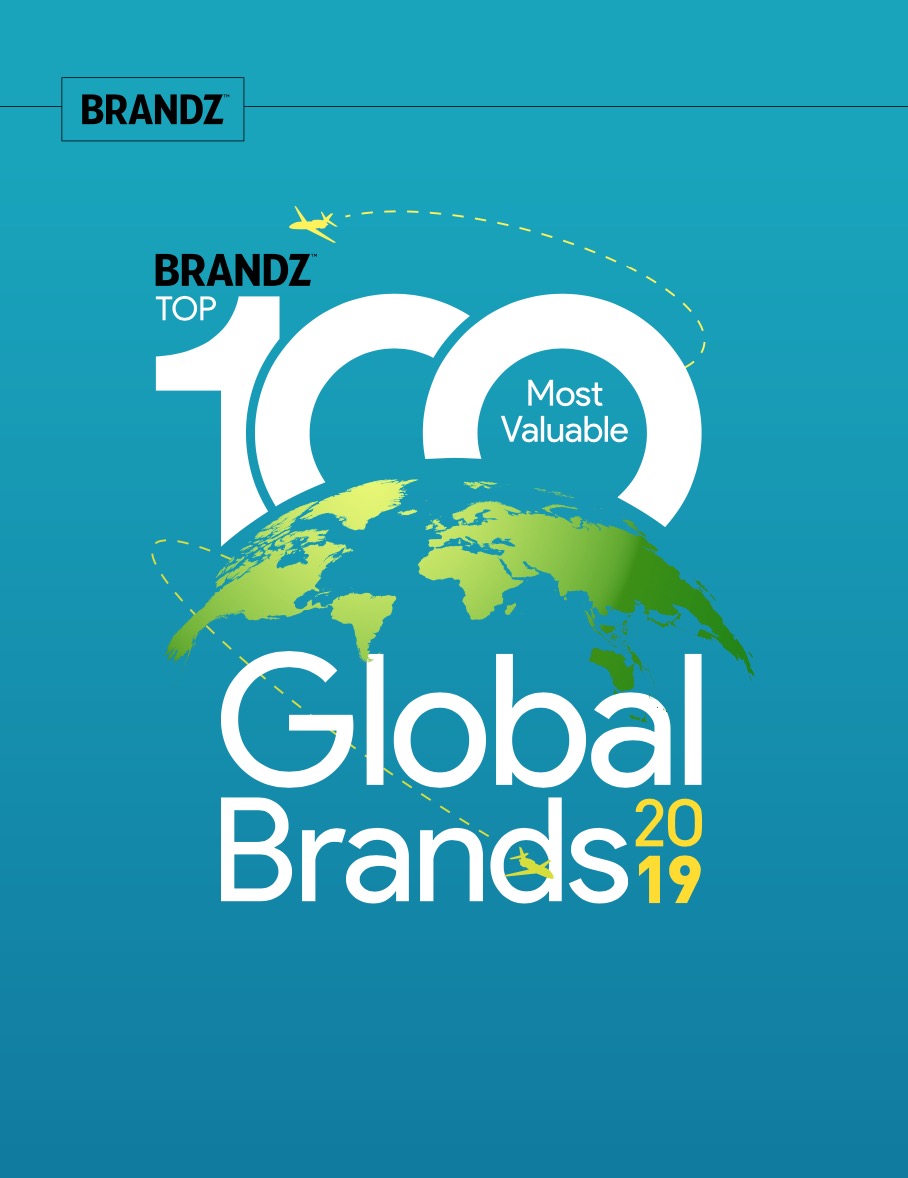 nocci - June 11, 2019 at 2:32pm
What a coincidence about making moolah off of their employees according to politics, but that's just the tip of the iceberg as to how they achieved making it to the top.
Reply · Like · Mark as Spam
Recent