A group of United States Senators and Members of Congress have written an open letter to Apple CEO Tim Cook urging him to reinstate the HKLive app.

The crowdsourcing app was used by Hong Kong residents to mark street closures and police locations as pro-democracy protests continue in the country. Apple caved to pressure from China and removed the app from the App Store earlier this month.

You can read the letter below...

We write to express our strong concern about Apple's censorship of apps, including a prominent app used by protesters in Hong Kong, at the behest of the Chinese government.

Late last year, you were widely quoted as saying, "At Apple, we are not afraid to say that our values drive our curation decisions." For those of us who support the promotion of basic human rights and dignity, it was refreshing to hear a tech titan say that priorities were more important than profits. So you can imagine our disappointment to read that Apple had removed HKMap, a crowdsourced mapping app widely used by Hong Kong residents, from the App Store this
week.

Hong Kong residents have, as you know, been protesting now for months, defending their promised autonomy and in support of greater participation in their civic life. Hong Kong's authorities have aggressively moved against these protestors with the support of the Chinese government. In the face of this brutal repression, tools like HKMap let peaceful demonstrators share locations to avoid and help to keep peaceful protestors out of harm's way.

HKMap is by no means the only app that Apple has censored in China. According to the nonprofit organization GreatFire, Apple has censored at least 2200 apps in China, which include Virtual Private Network apps used to circumvent China's Great Firewall, and apps made by and for oppressed ethnic minorities, including the Uyghur and Tibetan communities.

You have said publicly that you want to work with China's leaders to effect change rather than sit on the sidelines and yell at them. We, too, believe that diplomacy and trade can be democratizing forces. But when a repressive government refuses to evolve or, indeed, when it doubles down, cooperation can become complicity.

The Chinese government is growing more aggressive in its attempts to dictate terms to U.S. corporations, as last week's headlines involving Apple, the National Basketball Association, and Activision Blizzard make clear. Cases like these raise real concern about whether Apple and other large U.S. corporate entities will bow to growing Chinese demands rather than lose access to more than a billion Chinese consumers.

In promoting values, as in most things, actions matter far more than words. Apple's decisions last week to accommodate the Chinese government by taking down HKMaps is deeply concerning. We urge you in the strongest terms to reverse course, to demonstrate that Apple puts values above market access, and to stand with the brave men and women fighting for basic rights and dignity in Hong Kong. 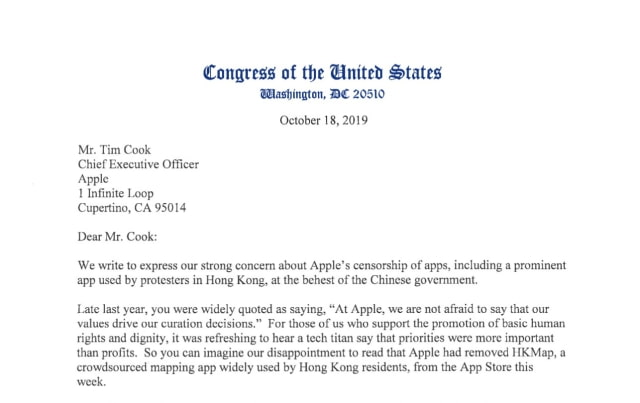 takeachillpill - October 20, 2019 at 1:04pm
Apple has more pull then any company to say no to China since they employ so many so unlike nba its not so easy for china to block apple so hopefully apple brings back the app then if China is stupid and blocks they can move the investment to India which has more growth potential thanks mostly to Chinas stupid 1 child policy anyway so if we stop giving our IP and helping the government continue to keep the chinese people in the dark with there firewall and propaganda that they are trying to push the world into self censorship and actually Apple has more of the Hong Kong market unlike mainland which Hong Kong protesters use airdrop to get info out since so many have iphones
Reply · Like · Mark as Spam

iAmMe - October 19, 2019 at 3:41am
If Apple will not abide then China might block them and so the result would still be the same. Better that app than might all of them
Reply · Like · Mark as Spam

1reader - October 18, 2019 at 10:04pm
I have a feeling that they care more about money than HK people. And they kinda like the dictatorial idea (but not to be told what to do but to dictate/control).
Reply · Like · Mark as Spam