Goldman Sachs has downgraded Apple's stock to a 'sell' and is predicting iPhone sales will be down 36% this quarter, reports Reuters.

The Goldman analysts also lowered their price target for the stock by 7% to $233 in its report forecasting the drop in iPhone demand for the quarter ending in June, Apple’s fiscal third quarter. The brokerage noted that average selling prices for consumer devices are likely to decline during a recession and remain weak well beyond the point when units recover.

“We do not assume that this downturn results in Apple losing users from its installed base. We simply assume that existing users will keep devices longer and choose less expensive Apple options when they do buy a new device,” Goldman Sachs analysts said in a note.

Refinitiv notes that of the forty analysts covering Apple, 30 have 'buy' or 'strong buy' ratings, seven have 'hold' ratings, and just three have 'sell' ratings.

Goldman's downgrade comes despite Apple's launch of a new iPhone SE that is listed at a more affordable $399 price point.

The firm also claims that Apple's next generation iPhones won't arrive until early November. We've heard this before; however, there have been rival rumors which claim the new models are still on track for September. 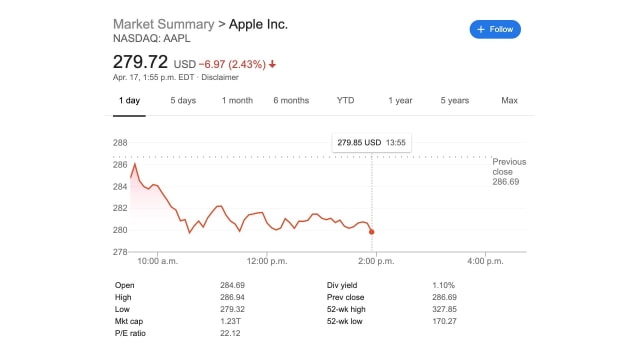