Driven by a surge in use and adoption of the device during the COVID-19 pandemic, quarterly first-time downloads of apps for Apple’s iPad surpassed 1.1 billion worldwide in Q1 2020, marking the first year-over-year growth in this metric since the fourth quarter of 2013 and a 40 percent increase from Q1 2019. At the same time, Sensor Tower Store Intelligence data reveals that quarterly global consumer spending in iPad apps saw its largest Y/Y increase since Q4 2014 at 16 percent, while crossing the $2 billion threshold for the first quarter ever. 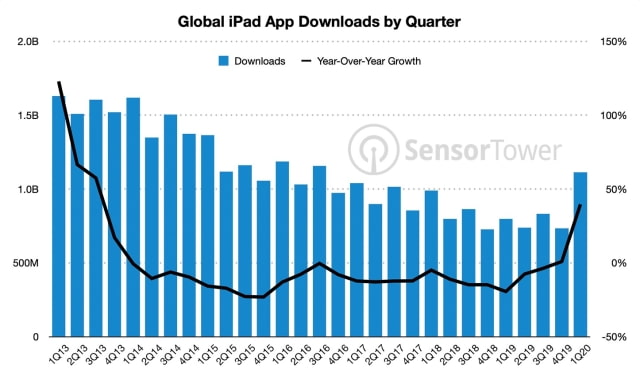 Customer spending on iPad apps reached a record high of $2.1 billion, six years after surpassing the $1 billion mark. Sensor Tower estimates that 76% of this, approximately $1.6 billion, came from games.

U.S. consumers contributed the majority of last quarter’s record total, spending approximately $893 million in iPad apps. This was 15 percent more than U.S. App Store users spent in iPad apps during Q1 2019. About $335 million of last quarter’s iPad app spending came from users in China, the second largest contribution to the platform’s quarterly revenue in Q1 and a figure 43 percent greater than the $235 million they spent in Q1 2019. As we witnessed with downloads, Education saw the sharpest Q/Q increase among iPad categories in terms of spending worldwide, increasing 35 percent over Q4 2019 to about $92 million. 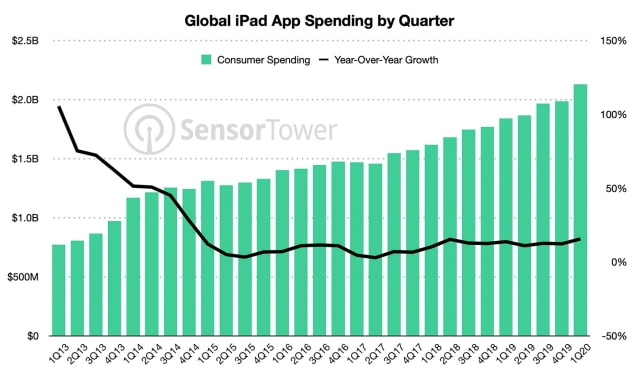