Foxconn has announced a drop in quarterly profits of 90% year over year in Q1 due to the coronavirus pandemic. The Taiwanese firm was forced to suspend manufacturing operations in China during the quarter and saw reduced demand from customers like Apple.

Net profit for January-March slumped 90% to T$2.1 billion ($70.3 million) from a year earlier - the lowest level since the first quarter of 2000 and well short of a Refinitiv consensus estimate of T$8.88 billion. Revenue declined 12%.

Despite this, Foxconn believes the worst is over for the company with new growth expected to come from work-at-home lifestyles being adopted around the world.

“Hon Hai will stabilize in the second quarter,” Foxconn said in a statement, noting that all of its main factories in China have resumed operations. “Telecommuting, online entertainment and new lifestyles have brought us new growth momentum,” said Foxconn Chairman Liu Young-way.

The company's enterprise and computing units are expected to grow yearly revenue by 10% and 15%, respectively. This will be offset by declines in sales for the consumer electronics division which includes smartphones. The virus is set to have 'an enormous' impact on demand leading to a 15% yearly decline in sales.

“For consumer electronic products, because everyone is staying at home, naturally it affects consumers’ purchasing power and such power might take a very long time to recover,” Liu Young-way said. 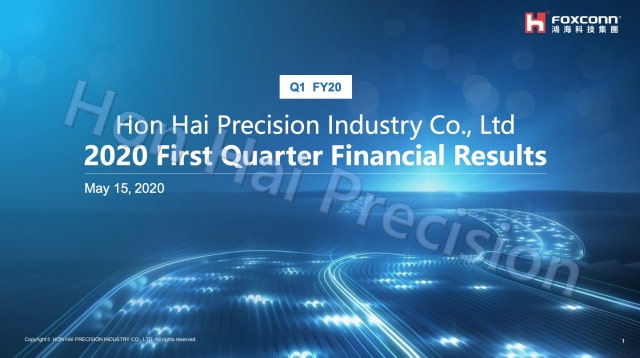 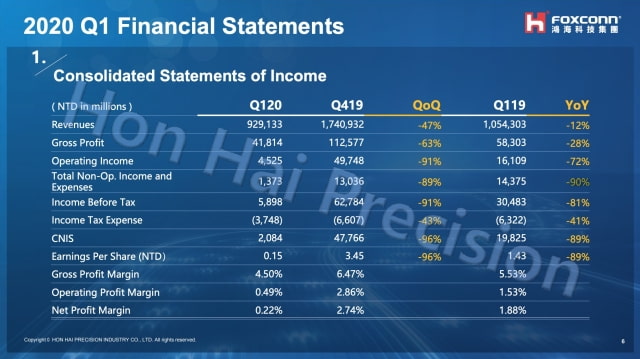