Apple plans to increase the screen sizes of its next generation Apple Watch and will introduce new watch faces to take advantage of the added real estate, reports Bloomberg.

The watches will be marketed as 41 millimeters and 45 millimeters, an increase from the current 40- and 44-millimeter versions, according to the people, who asked not to be identified because the specifications aren’t yet public. But those sizes refer to the vertical dimension of the case. The new screen itself -- measured diagonally -- will be about 1.9 inches on the larger model, up from 1.78 inches.

One new watch face, dubbed Modular Max, will show digital time alongside one small compilation with larger complications that span the length of screen stacked on top of each other below.

Another face, dubbed Continum, will change based on the flow of time and the current hour.

Other improvements to the Apple Watch Series 7 include a faster processor and a redesigned body with flat edges. Apple is also using a new lamination technique to bring the display closer to the cover glass. This improvement has contributed to production delays that could affect the device's release date or availability.

Looking forward to next year, Apple could unveil a new low-end Apple Watch SE model, a rugged model for extreme sports users, and an update to the flagship model. There's also major health features in the works including temperature and blood pressure sensors. 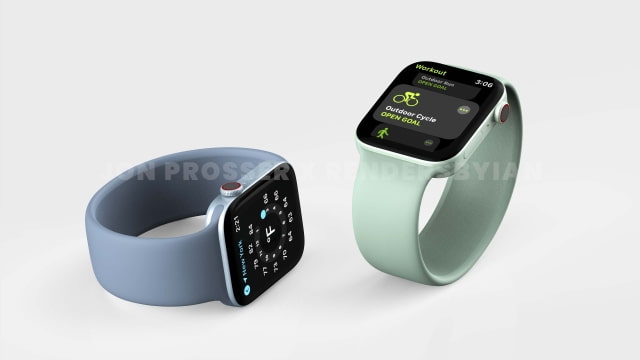