Steve Jobs has made the fifth annual TIME 100 List of the world's most influential people.

Barbara Kiviat had this to say about the number 81 Steve Jobs:

Steve Jobs is great at playing the countercultural icon. He's a college dropout who once backpacked around India looking for spiritual enlightenment, and he takes only $1 a year in salary. There are righteous battles to fight, and with Macs and iTunes and iPhones, Jobs fights them, taking on the entrenched megaliths that try to dictate our tastes in computers and music and mobile phones.

But don't let the black mock turtleneck and denim trousers fool you. More than anything else, Jobs is a canny CEO who knows how to sell product. Steve Wozniak was the technical genius behind the first Apple computer; Jobs saw the marketability. He now presides over a company with $24 billion in annual sales and 22,000 employees. Jobs, 53, is revered by tech and design geeks, but the world's business-school students may have the most to learn from him. Apple's stock has shot up more than 70% over the past year, thanks to Jobs' strategy of focusing on his most profitable customers and coming up with new things to sell them—the ultra-thin MacBook Air most recently—rather than just chasing more market share. 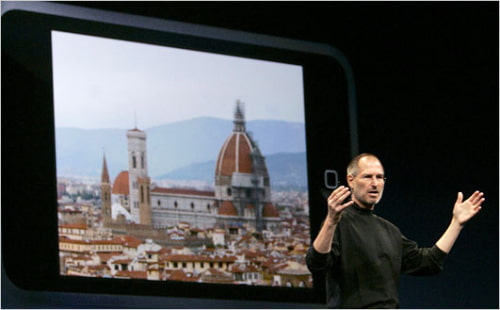 Jobs may be a celebrity CEO, but he doesn't jump out of airplanes or traipse around Africa with bundles of cash. He is always in character and always on message, so much so that when late-night TV parodies him, he's invariably rolling out some new iProduct . Jobs gets called mercurial, egomaniacal, a micromanager. If that sounds a little like a CEO doing his job, maybe that's because he is—and a mighty fine one.