From Brooklyn to Manhattan, Piccadilly to Westminster, and the Eiffel Tower to Notre-Dame, iConquer 4 lets you conquer world-class cities one neighborhood at a time. Crafted from over 50 megapixels of satellite imagery, maps feature exquisite detail and neighborhood borders with block-by-block precision.

iConquer 4 features new computer player personalities with advanced artificial intelligence algorithms. The Axis of Evil players conspire to eliminate one enemy at a time. Hermit players fight for each continent, while xenophobic Homeland players defend their one homeland against outside invasion at all cost. The Phalanx player ravages the map with one roving band of mayhem, and the Librarian conquers the world one country at a time... alphabetically!

The new messages window gives you a play-by-play account of all the action in the game. As players fight for control of the map, the messages window reports every victory and defeat, when players are eliminated and when they conquer the world. iConquer also features network game play. Up to six people play against each other over the internet, and Bonjour networking makes connecting to other players on your local network easy. 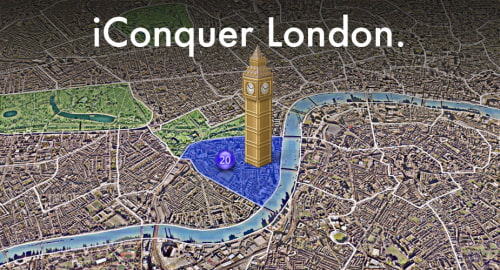