Chaos ensued after an Apple Store in Beijing removed the limit on how many iPhone 4s could be purchased by one customer, causing police and security to temporarily close the store, according to a MICGadget report.

This is crazy. The store opened at 7am today. After 3 hours, people are stopped for queuing up and a piece of notice was being put up on the front doors, saying "Temporarily closed". No one could enter and there's only a few customers walking out with 20-30 boxes of iPhone 4. These "customers" then lurked outside the store ready to pounce on any passers-by who is checking out for iPhone 4. "Want to buy an iPhone 4?" they say. "We have a lot. Come with us."

According to sources, the real customers and the iPhone 4 scalpers had a fight in the Apple store. A gang of scalpers were cutting the queue and some customers were fed up with the scalpers for buying large quantities of iPhone 4 and resell them outside the store. The police and Apple's own security staff appeared to clean up the mess and due to the chaotic crowd, the store needs to be closed temporarily… 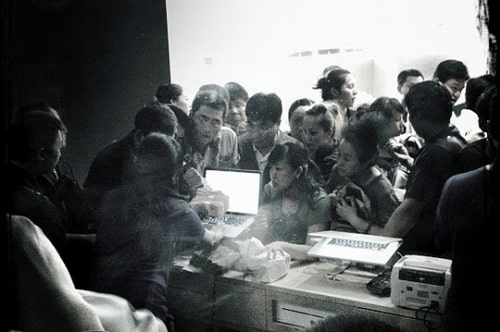 Dev - September 30, 2010 at 7:38pm
Really Apple? You guys really thought that lifting the purchase limit would be a good idea? What the HELL were you guys thinking!? of course you are going to get scalpers in there buying 20-30 iphones at a time.
Reply · Like · Mark as Spam

will.i.am.not - September 30, 2010 at 9:40pm
yeah of course. the \"farmers\" are already crazy. i was at the shanghai store in the puxi side and it\'s the same shoppers that were in the pudong side apple store which sold out first. these farmers cut the lines, get in shouting matches with other ppl and security and usually win because they have more fight in them. they RUIN the experience for apple shoppers. APPLE you greedy idiots. i only blame apple. they can check id and limit only a certain per person and then also give out sequential number tickets so that ppl wont cut in line. also they should enable to order online so you dont subject your REAL APPLE customers to rude chinese ppl. i just want to make it clear that normal chinese ppl are civilized. It\'s these farmer types with dark skins, oversized suit jackets etc I have no problem with apple trying to make money but they do it at the expense of their true loyal customers. they can and have the power to stop the bad behavior but chooses the profit overall. APPLE FAIL
Reply · Like · Mark as Spam
Recent