Microsoft has revealed nine new Windows Phone 7 handsets that will be available this holiday season from leading mobile operators in Europe, North America and Asia Pacific.

With more than 60 mobile operators in over 30 countries worldwide committed to bringing Windows Phones to market, the millions of people around the world looking for a phone that plays as hard as it works will have a variety of phones from leading device-makers to choose from.

-----
Windows Phone 7 will be available in a variety of sleek form factors from device-makers such as Dell, HTC Corp., LG and Samsung, and from mobile operators including América Móvil, AT&T, Deutsche Telekom AG, Movistar, O2, Orange, SFR, SingTel, Telstra, TELUS, T-Mobile USA and Vodafone. All Windows Phone 7 phones will include the high-performance Snapdragon™ processor from Qualcomm. A broad selection of phones will begin shipping in holiday 2010 with more arriving in 2011, including phones from Sprint and Verizon Wireless. In addition, select models will be available at Microsoft Store locations and from Amazon.

Windows Phone 7, Glance and Go
In today’s busy world we are spending more time heads-down on our phones than interacting with the people we’re sitting next to and missing out on important life moments. Windows Phone 7 was designed to deliver a mobile experience that has the phone working better for people, bringing together the things they care about most and helping them to get things done faster.

For example, the customizable Start screen with Live Tiles is a personal experience, showing people their own content. The Live Tiles come to life with real-time updates from the Web such as news, appointments or the status of friends. New Live Tiles can be easily created from whatever content a consumer wants, such as applications, websites and music.

Fueling New Experiences
Windows Phone 7 marks a new era in mobile gaming as the first phone1 to put the power of Xbox LIVE into the palm of people’s hands with a blockbuster lineup of game titles from award-winning publishers. In addition to the titles already announced earlier this year, Electronic Arts Inc. (EA) today announced the first wave of EA games coming to Windows Phone 7 this fall. As part of Microsoft’s managed portfolio of Xbox LIVE titles, all EA games for Windows Phone 7 will be Xbox LIVE-enabled. EA will deliver a portfolio of titles that offers something for every mobile gamer, from casual to core, including “Need for Speed™ Undercover,” “Tetris®” and “The Sims™ 3.”

Windows Phone 7 is also the first to offer the Zune music experience on a phone: People can play their music collection, synced wirelessly from their PC, or stream or download new tunes from Windows Marketplace. An optional Zune Pass subscription is available.

Search is made easier with a dedicated button to help people find what they need, whether in contacts, in Marketplace, in e-mail or on the Web. From the Start screen, the Search button delivers Bing for mobile, delivering Web results, local information, maps, directions and more.

The Windows Live solution helps people manage pictures, Windows Live calendar, Office OneNote Mobile and more. The free Find My Phone service new on Windows Live can remotely ring, lock, erase and show the location of your phone on a map. Complete information about Windows Phone 7 features and capabilities can be found at http://www.windowsphone.com.
-----

New Windows Phones
The following devices will come to North America, Europe and Asia Pacific in the holiday 2010 timeframe. 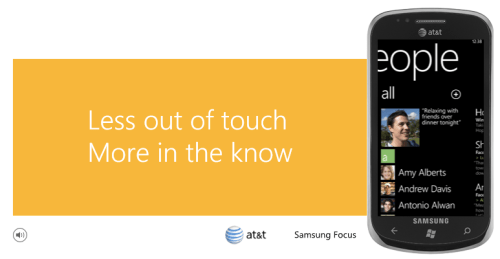 Kroo - October 11, 2010 at 5:21pm
No cut & paste, no multitasking. This is like the iPhone of 2007. Microsoft are running way behind and will never make an impact because they copy others instead of innovating. When did they ever have an original idea that actually worked??? FAIL!!!!! Still, all the MS fanboys will go apeshit and jerk themselves off so hard over this they\'ll have an aneurism. Enjoy....ha ha.
Reply · Like · Mark as Spam

fenrry - October 12, 2010 at 2:37am
...I\'m pretty sure that such \"features\" are included in the OS, besides and as far as I remember, wasn\'t el Jobo who claimed that his work was mainly about stealing rather than copying, besides MS has probably more ideas patented than Mapple, IBM for sure does yet they don\'t spend countless amounts of monies patenting words like \"there is an a** for that\" ( don\'t want to pay for typing a word), next thing u know is we have to pay a compny for using words they have \"trademarked\"...
Reply · Like · Mark as Spam

Name - October 11, 2010 at 4:02pm
iPhone going to come out ahead cause of this regular mess of things Microsoft brings. They like overwhelming the masses, don\'t they?
Reply · Like · Mark as Spam
Recent