Apple may release the new MacBook Pros as early as March 1st, according to a new report from Danish blogger Kenneth Lund.

I have just come into possession of evidence that - by all accounts - with new MacBook Pro models in Danish stores Tuesday 1st March.

The source would by nature to remain anonymous (thus deleting) but I can reveal that this is one of "the 3 major chains" on the Danish market, which is officially Apple Resellers.

Best Buy is reporting a date of March 11 in their inventory system for the revised MacBook Pro. It's unclear which is correct; however, by all accounts the notebook line should receive an update very soon. 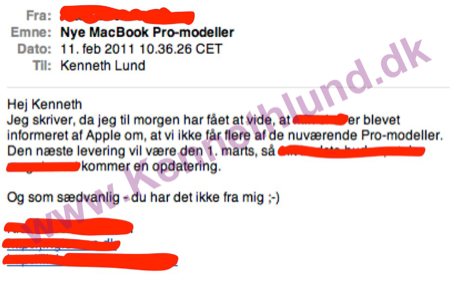