Apple may surprise with near immediate availability of iPad 2 next week, according to a new report from AppleInsider.

According to people familiar with the matter, Apple is preparing several of its operating segments to perform functions during the second half of next week that are representative of nothing short of a large scale, consumer-oriented product roll out (not just an announcement). And with official invitations to next Wednesday's press briefing clearly indicating a focus on iPad, these people believe at least one version of the refreshed device will be in transit to retail outlets during that briefing.

The iPad 2 is rumored to be thinner, lighter, feature two cameras, an improved speaker, an anti-glare display, and the new Thunderbolt port. Apple is holding a special event on March 2nd where they will likely launch the device. 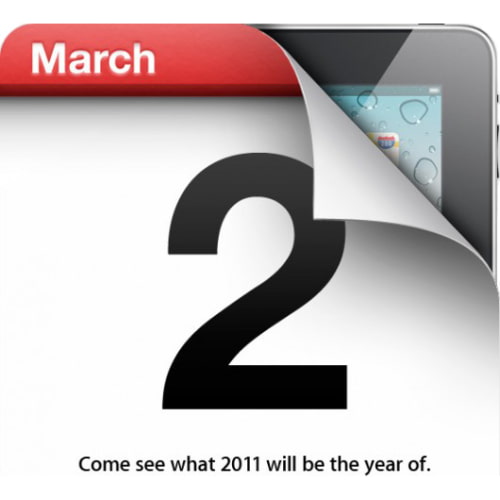 crankyboy - February 27, 2011 at 5:34pm
Thank you for your fail. It is both timely and as useful as yourself. When you have something to add to the conversation please feel free. Until crawl back under your rock and let the adults talk.
Reply · Like · Mark as Spam

Not an apple fanboy - February 26, 2011 at 2:11am
Who are you kidding. What ever apple releases will be a success. They own the mobile market and tablet market (no matter what reports say) by pure numbers out there. They only don\'t dominate the pc market
Reply · Like · Mark as Spam

Russell - February 26, 2011 at 12:42pm
Apple TV is not a success, first or second generation. Nor the bluetooth headset which was only around for 1yr.
Reply · Like · Mark as Spam
Recent