A new hire suggests Apple may be planning to use carbon fiber instead of aluminum in its future devices., according to a 9to5Mac report.

Kevin Kenney has spent most of the last 14 years building carbon fiber bicycles as the President and CEO at Kestral Bicycles. This month, he became an Senior Composites Engineer at Apple after consulting for the past few years. What does Apple want with an expert in carbon fiber and other composite applications? iBikes? No.

The site notes that Apple has already filed a Carbon Fiber Patent with Kenney's name on it in 2009. That patent was for a "housing for an electronic device or other object formed from a fiber-in-matrix material".

Using Carbon Fiber would allow Apple to significantly lower the weight of their devices while retaining their strength. Although there have been rumors about Carbon Fiber devices in the past this hiring confirms Apple has Carbon Fiber in its future. 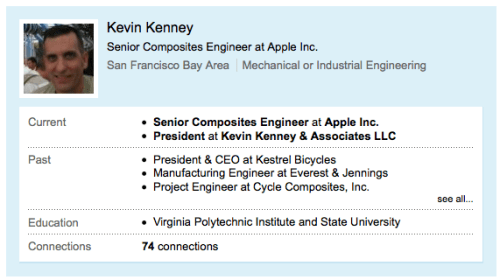