Although the company has apps for the iPhone and iPad, Hastings reveals that the Apple TV is their most important focus.

Hastings: TV is most important for video, as opposed to music, which works well on mobile. In coming years we’ll be on lots of Web TV app stores.

Hastings: Meh. Apple TV is more important for us. Tablets not a revolution. The big deal for us is Internet-connected TVs.
---

In January, Netflix announced that the Apple TV had surpassed the iPad in viewing hours after only four months of availability. "AppleTV has done very well for us, and in just four months has passed the also-growing iPad in Netflix viewing hours. " At the time, Apple had sold over 15 million iPads compared to a little more than 1 million Apple TVs. 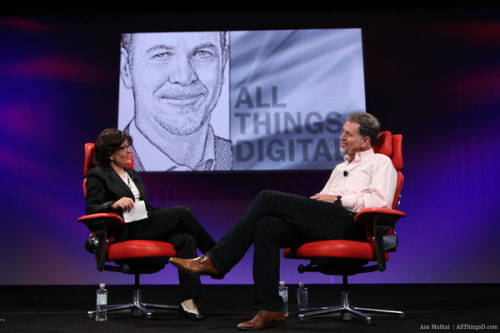 Tigres - June 1, 2011 at 6:22pm
Good, now fix your silverlight software on apple tv so many more can use it. Having 24mb connection and having Netflix read it as .70 is absurd. Yes it is only apple tv and be netflix that is still broke. Pause. Play. Pause play spin pause play pause pause play. forget it.
Reply · Like · Mark as Spam
Recent