AppleInsider has published an in depth look at how Apple Push compares to Exchange, BlackBerry and Google.

Push messaging was brought into the mainstream by Research In Motion, which got started selling two way pagers. RIM gradually advanced its network with a bolt-on system that interfaces with corporate messaging servers (such as Exchange Server or IBM's Lotus Notes Domino server), grabs any updates from the server, and sends them to RIM's own servers at its Network Operations Center, which then relays the messages over the mobile network to BlackBerry devices. This works out well for RIM, as it gets to sell the BlackBerry devices, the BlackBerry Enterprise Servers that connect to each company's mail server, rather expensive client access licenses (CALs) for each user served by the BES, and then on top of that charge steep monthly messaging fees for every user served by its relay system.

In response to RIM's success, Microsoft advanced its own competing push messaging component to Exchange Server (somewhat confusingly called Exchange ActiveSync or EAS, although it bears little in common with the desktop ActiveSync tool), which pushes out updates to mobile devices directly. Microsoft is currently still in a distant runner up position behind BES, so it does not yet charge for CALs for using EAS, and does not bill companies per-user service fees to relay messages to their own employees. Of course, Microsoft does still require per-mailbox CALs for every user on Exchange, which results in making it an expensive solution once you start adding users. 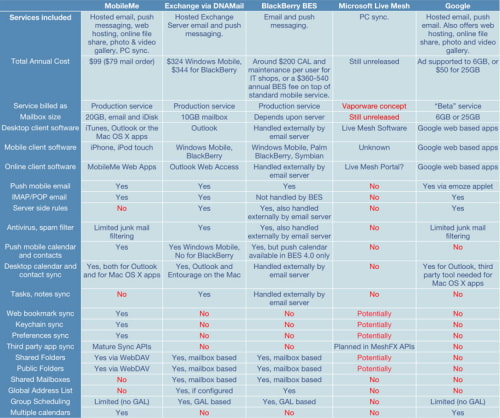 daniel - August 11, 2008 at 3:12pm
"Microsoft is currently still in a distant runner up position behind BES, so it does not yet charge for CALs for using EAS, and does not bill companies per-user service fees to relay messages to their own employees." This article has sooo many errors its just like comparing apples to oranges or how you name it. The price for example - there is many hosted exchange providers that are much cheaper. If Microsoft isn't billing for something it means its not working yet? Hehe yeah - working since exchange 2k7 without any problems and deployed in HUGE scenarios. Not as big as the cloud but ... Also the iphone is missing as supported mobile phones, also symbian etc. You can also have as MANY calendars as you want - not on all clients but you can. IF you want more wrong facts out of this funny thingy let me know.
Reply · Like · Mark as Spam
0

G - August 11, 2008 at 12:43pm
If I wrote an article titled "Something vs Anything" I'd be sure to mention "Something" in my text. As your article appears, Apple's push service is left out. I know that there is a separate article, but wouldn't it benefit readers to include a summary of how Apple's service works in your text along with RIM and Microsoft's? It seems strange that this was excluded given the title of the article.
Reply · Like · Mark as Spam
Recent