Newly leaked images claiming to be of the upcoming new, cheaper 'iPhone 4S' show changes in the frame and antenna, reports MacRumors.

The site has received part images of the 'iPhone 4S' from iPatchiPods.

The mid-frame images above show that this so-called iPhone 4S will have two antenna breaks at the bottom of the casing. This differs from both the AT&T (GSM) iPhone 4 and Verizon (CDMA) iPhone 4. In AT&T's iPhone, the antenna breaks are in two spots, along the lower left side and top left sides. On the Verizon's model they are both at the top sides of the casing.

The movement of the antenna breaks is said to be for the accommodation of different mobile frequencies. A SIM card slot suggests it will at least support GSM but it's unclear if the device will be a 'world phone' as the iPhone 5 is thought to be.

Interestingly, the bottom portion of the frame does not have a defined Home button area.

The bottom portion of the frame is shown here. As noted by iFixIt's Scott Head, what's most interesting about this part as compared to the iPhone 4 part, is the lack of any defined "Home Button" area. The corresponding iPhone 4 part shows a cut-out area for the Home Button. It's hard to draw an conclusions from this, but there has been a lot of speculation that Apple could be changing the Home Button area on the iPhone 5. 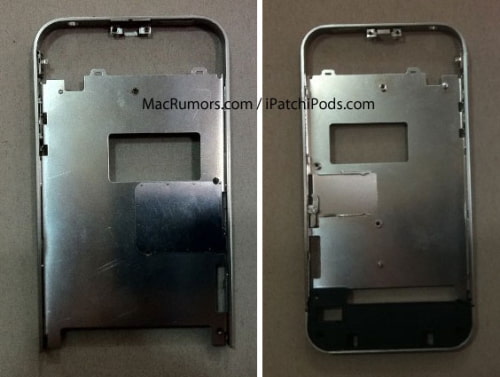 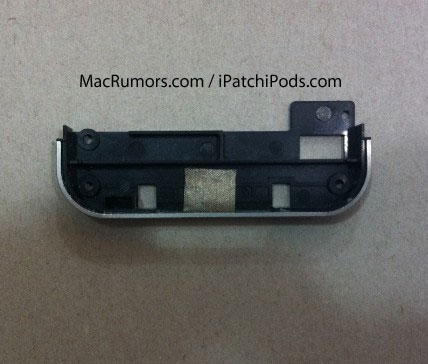 Pegasos - August 26, 2011 at 2:44pm
I think it's a version of IPhone clone from the chinese Market ,i saw a couple model and Ã®s very similar to original In my opinion the next iPhone don't have a Dock connector because iOS5 not need ar all this connection. We entering in the Wifi Era
Reply · Like · Mark as Spam

human.0.id - August 27, 2011 at 5:16pm
Oh, nice! So now we are going to charge an iPhone over the air and throw away our dock stations, speakers, car kits and other stuff that was developed for using with an iPhone dock connector? You kidding right? ;-)
Reply · Like · Mark as Spam
Recent