Sprint is selling its iPhone 4S unlocked and Verizon says it will unlock the iPhone 4S after 60 days, reports MacWorld.

Sprint plans to sell the iPhone 4S with its micro-SIM slot unlocked; Verizon's will be initially locked, but if you've been a customer in good standing for 60 days, you can call Verizon and ask for an "international unlock." (A Verizon spokesperson told me that this is Verizon's standard policy for all world phones-it's just the first time it's manifested itself on an iPhone.)

Apple says it will begin selling an unlocked iPhone 4S without subsidy starting in November. 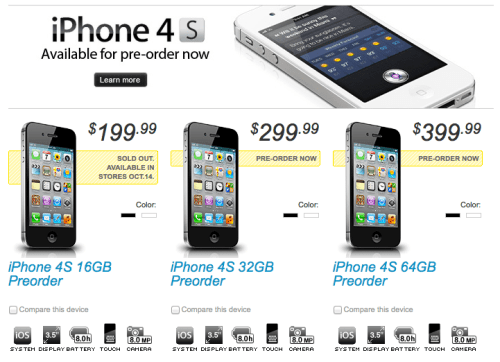 Lynxy - October 12, 2011 at 1:18pm
Just called AtnT. No unlock!!! I have no reason to stay there I switch to VZw in couple months. I sell my 2 phones I have to compensate early contract break.
Reply · Like · Mark as Spam

tarek93 - October 12, 2011 at 8:33am
Didn't' Apple say about the unlocked iphone that will be released next month that it won't work on CDMA networks ? how could sprint support both cdma & international GSM together ?
Reply · Like · Mark as Spam

6italia0 - October 12, 2011 at 8:59am
you can activate the meid on cricket or metro pcs, you dont have to flash it either, it just works. I just activated a vzw iphone 4 on cricket today 4.2.10 no jailbreak just activated the meid and dialed *22804, but otherwise you are right
Reply · Like · Mark as Spam
6 More Comments
Recent