Nielsen has released its State of the Media: The Mobile Media Report for Q3 2011.

Mobile consumers are social, always connected, and rely on their phones more than ever before. According to Nielsen's monthly survey of 25,000 mobile consumers (which translates to 300,000 each year), 44 percent of U.S. mobile subscribers now own a smartphone device, compared to 18 percent just two years ago, and these advanced devices are changing the way consumers interact with their phones.

Key Findings:
• The majority of 25–34 and 18–24 year olds now own smartphones (64% and 53% respectively) and they have led in smartphone penetration compared to other age groups since 2009.
• Apple is the top smartphone manufacturer in the U.S. with 28.6 percent of the smartphone market, and Android is the most favored operating system by manufacturers, with the largest share of the smartphone market at 44 percent.
• 83 percent of all smartphone application downloaders use Android or Apple iOS smartphone devices and they mostly discover apps by searching the top app stores and relying on recommendations.
• Application usage varies by age on the Android platform-older generations like games, such as Angry Birds, and rely on their mobile devices for productivity (e.g. Google properties). Younger folks will use entertainment apps with social dimensions (e.g. Pandora, YouTube, Words with Friends) more than older segments.
• Younger groups send the most messages, but older segments present the greatest growth opportunities: In Q3 2011, teens 13-17 sent and received the most messages (an average of 3417 each month), but the number of messages sent by those 55+ has more than doubled compared to 2009.
• Marketers can now reach consumers while they shop: 49 percent of mobile consumers say they frequently use their smartphones while shopping.
• Social networking is increasingly popular on mobile devices: Android smartphones and iPhone users spend more time engaging with the Facebook application on their phones than any other mobile application.

You can download the entire report from the link below... 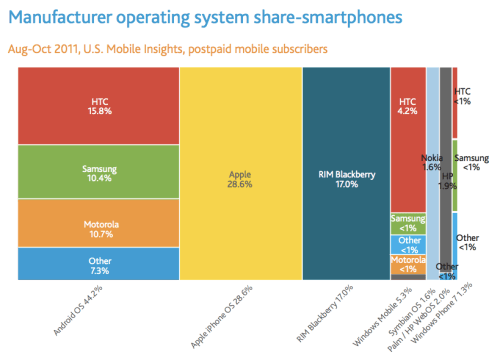 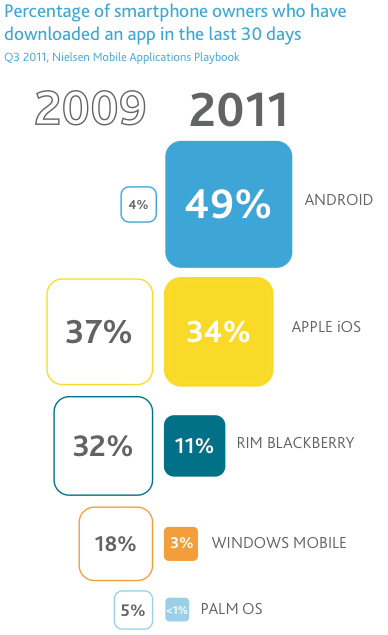